October was a pretty good month.  Two 14ers, two good long runs, a sub 40 10k, and some faster (for me, anyways) stuff.  Of course these last few days were sort of a forced rest period, I got out in the single digit temps but it was nothing of any quality.  Including Thurs morning when it was 9F.  But the run home, in 40F temps, had me feeling like I was about to come down with heatstroke.

Hope to get in one last long run on Saturday morning and then chill out until it's time to leave for Georgia.

On Saturday and Sunday I spent all day in Cheyenne Canon for the Colorado Mountain Club self rescue class.  Learned how to get out of some sticky situations while climbing outside.  Perhaps you are belaying and your climber breaks an ankle.  Or maybe you're climbing and a bear eats your belayer.  Stuff like that.  Saturday was great but Sunday was pretty rough as the shitty weather had rolled in and it was super cold and wet in the Canon.

Was pretty stoked to get the class under my belt, and I signed up for two more CMC classes - the basic avalanche class and an intro to ice climbing.  The long term goal is to complete the HAMS class (high altitude mountaineering school) which includes a summit of Rainier.

Mon - we got a good seven inches of snow on the westside and it was cold as balls.  My office closed down so I had the day off, and I got in a nine miler in the Garden.  Didn't get above 23F all day.

Tues - run commute 67.  19F with a lot of snow and ice on the ground.  Just trying not to lose too much fitness on stretches like this, I get zero quality in when conditions are this shitty.  Supposed to get even worse for my run back home.  Yay.

In totally unrelated news: when Army whoops Air Force this Saturday my cadet has to buy me a slice of pizza from Slice 420 and sing the Army song while I eat it.
Posted by brownie at 1:12 PM No comments:

Wed - bike commute 64.  Straight to and home from work.  Nice and sunny and warm on the way to the office, dark and cold and snowy on the way home.  Ran into my bike commuter neighbor at the 8th street red light on the way home, and as we were suffering through rain and snow and cold and darkness just waiting there he said to me, "at least we're not in a car."

Thurs - run commute 66.  Running as transportation only, as we got a good five inches of snow on the westside and the midland trail was a sheet of ice.  Hearing Pikes got a ton of snow though I haven't seen her since this storm rolled in.
Posted by brownie at 8:46 AM No comments:

Had to head up to the Academy for a soccer game today, so I ran there.  Just under 21 miles, fighting a nasty headwind the entire time.  Hope to get in one more long run before the marathon.

Dropped by the Colorado Running Company on the say home to pick up some new shoes.  Infantry blue for the Soldier Marathon (they didn't have black). 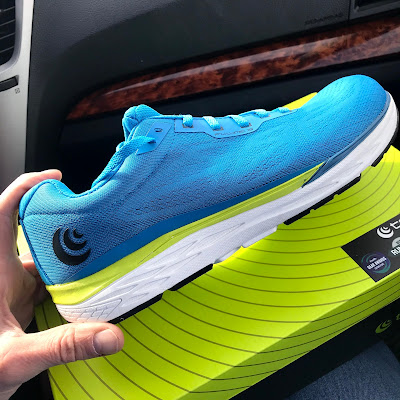 Posted by brownie at 6:13 AM No comments:

39:26.  Not a great race, but I'm happy with the time as the goal was sub 40.  Solid on the out of the out and back, reaching the halfway point in 19:20, but the back was uphill and into the wind and I struggled.  But most of the online calculator predictors say that a 40 minute 10k, on paper, with an internet connection and cup of coffee, equates to a sub 3:10 marathon.


There was one other semi-fast runner there, and he was winning for the first four miles of the race after a super fast first mile, but he struggled more than I did over the second half so I ended up taking the win.  Race was to benefit the Douglas County Veterans Memorial Foundation and I got a coin for winning. 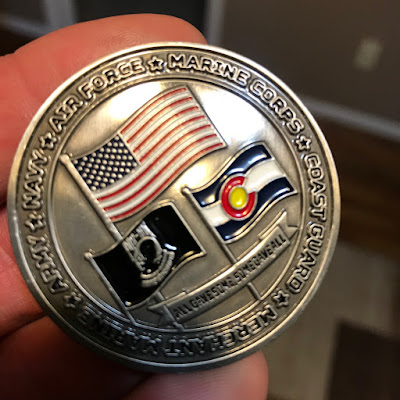 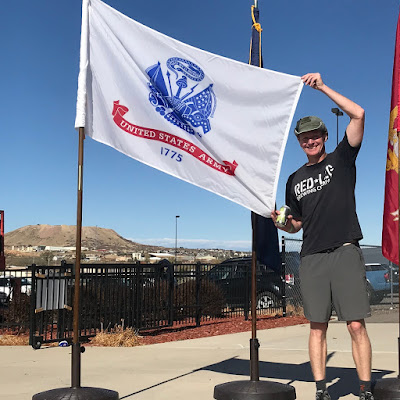 After the race we dropped by 105W Brewing to celebrate.  Castle Rock has quite a few good breweries nowadays, Burly and Wild Blue Yonder, plus Maddie's Beergarten, but 105W is still our go-to. 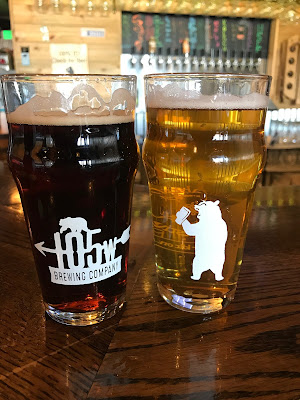 After we got home I headed out again for my first hash in months.  Good to get back out there on trail, even if I spend most of my time lost and wondering around the westside.
Posted by brownie at 8:21 AM 2 comments:

Monday - weird commute day as I had to drive to pick up our cadet from the airport.  Ran home, 5.5 miles through Sondermann in an hour.

Wed - had to pay a visit to the Territorial Correctional Facility down in Canon City.  Decompressed after that shit show with a 60 minute run at Oil Well Flats.  Grabbed lunch at the Owl Cigar Store, which you should visit if you're in Canon (they do not sell cigars, but have great burgers) and then paid a visit to Florence Brewing.

Tim B took this shot of me on my way up to the summit of Cheyenne Mountain: 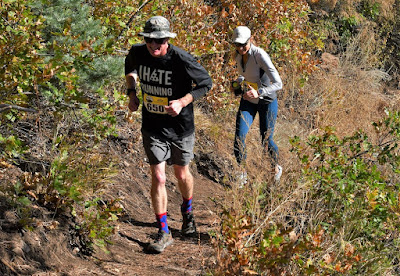 Fantastic weekend here in the Springs.  On Friday we found out the Dirty Dozen Brass Band was in town.  Dropped by Red Leg on our way to help them celebrate their silver medal at GABF for the Howitzer Amber. 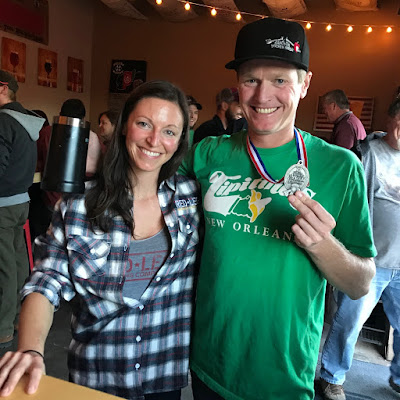 Then went over to the Ent Center for the show.  Not my favorite venue ever but holy shit what a great show! 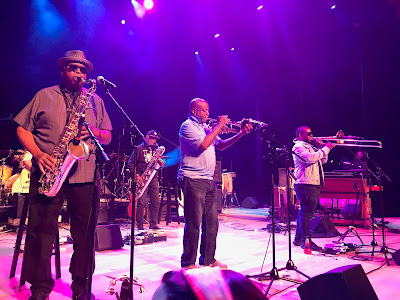 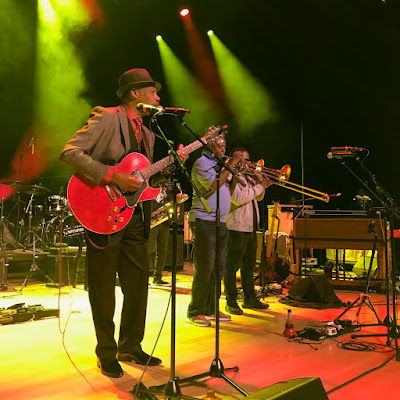 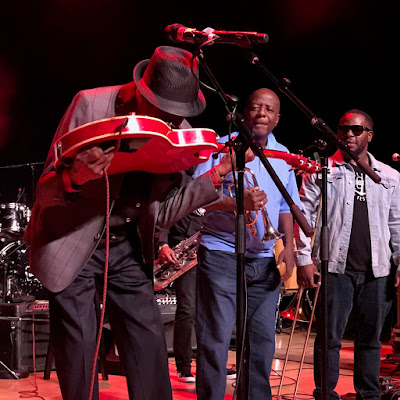 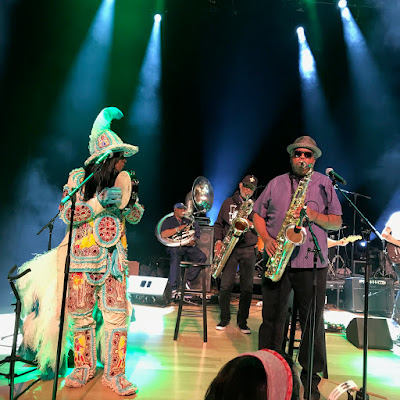 Made the poor but awesome decision to hit up Murphy's on the way home.  Which kind of sabotaged my race on Saturday, the Cheyenne Mountain Run.  Had a good training day, but I was hoping to run a bit faster.  Wasn't a complete disaster though, and it was a good three hour long run for me.

After the run we headed up to the Air Force football game.  Exciting game to watch as there wasn't much defense, and Air Force ended up with the win. 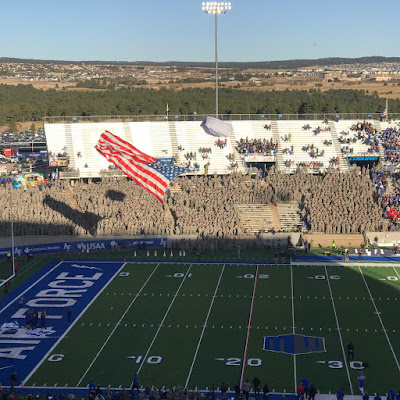 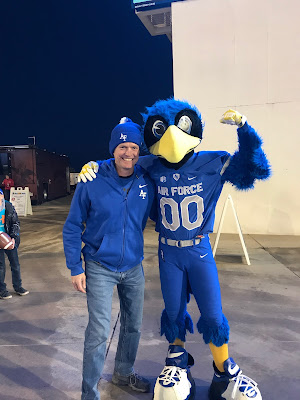 Not sure how much longer we'll have great weather, so I took advantage of Sunday.  1.5 hour hike with the dog in the Garden, seven mile run on the Garden roads, then two hours on the bike in Red Rock Canyon.  Then $100 and I grabbed the climbing gear and headed back over to Red Rock Canyon.  Nobody died, so I'd call that outing successful.  Here's a shot of my rappel after cleaning all the gear: 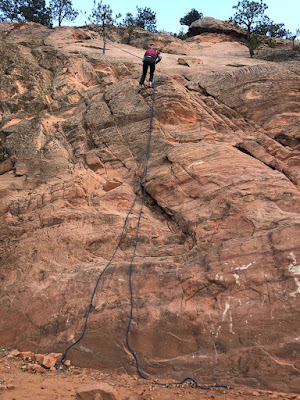 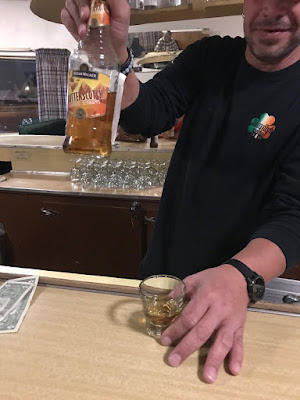 32. Butterscotch Schnapps
Posted by brownie at 5:00 AM No comments: 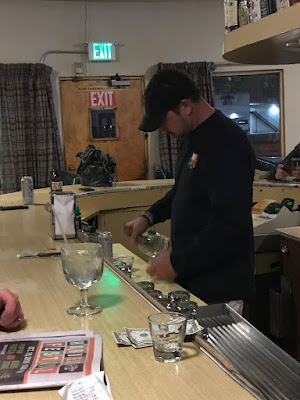 Varsity club 31. Goldschlager.
Posted by brownie at 9:19 PM No comments:

Monday - had to drive to work due to the dog having a vet appointment.  Everything was normal at her annual check up.  After that, and after a nice dog walk, I rode over to Garage Run the long way.  20 miles total on the bike.

Tuesday - run commute 62.  Five miles to and back.  Ran right around 20 minutes for the middle 5k.

Wednesday - bike commute 60.  Straight to work, then eleven miles back home.  It was 77F when I left the office.  Headed out to Trails End for a bit and then went over to Front Range for some bluegrass.  Walked back home around 10PM in a short sleeved t-shirt.

Thursday - It was 27F when the dog and I left the house for the morning hike.  Still ran to work, but I took the short four mile route due to the weather.  The first day of freezing temps is always a shock.  Pikes was supposed to get up to a foot of snow but I have been unable to see the mountain all day.  CityRock 109 at lunch, very close to getting another V4.

I am signed up for the VetFest 10K in Castle Rock on October 19 if anyone wants to throw down.
Posted by brownie at 4:35 PM No comments:

After Castle Rock I headed out towards Aspen.  Making two stops along the way. 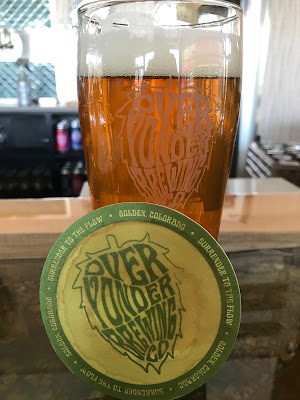 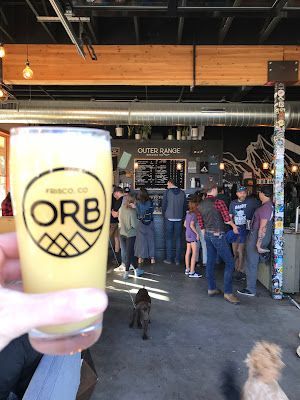 Slept in the van outside of Aspen, and got an alpine start on Saturday with the local chapter of the Colorado Mountain Club.  Did the Castle/Conundrum loop.  I had done Castle before years ago, and Conundrum was my 35th Colorado 14er.  This pic is from the summit of Castle.  Notice my sweet ice axe! 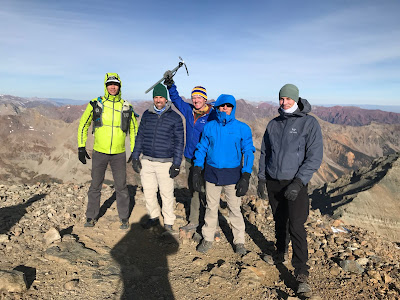 Headed up to Conundrum, Castle in the background: 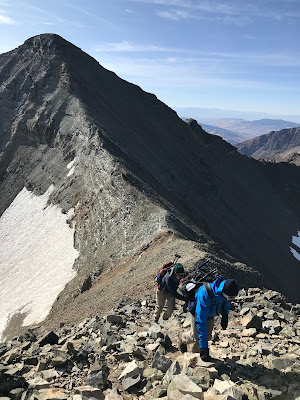 Castle from the summit of Conundrum: 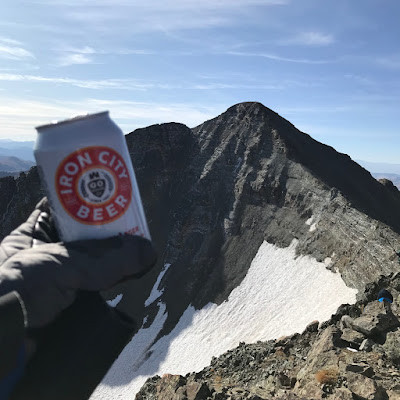 
Headed straight home after the 14ers.  I could see the smoke as I drove through Buena Vista, looks pretty bad down there.  It was bad enough a week earlier that I assumed there was a different fire, but it's just one big one.  Hopefully the snow starts falling soon.

On Sunday I got up early and drug the wife and the dog over to the Garden for a five mile hike on the roads.  It was the quarterly "motorless morning" in the Garden, and we pretty much had the roads to ourselves.  After the hike I went back to the Garden for a run and got in a good 18 miler.
Posted by brownie at 10:13 AM 1 comment:

I had Friday off as we were going to head out to Buena Vista for the 14er fest.  Woke up early and got in 15 miles in 2:07 on the Midland, Santa Fe, and Sinton trails, which are all paved or packed dirt.  Good run.

BV was fun.  We got to park the van by the river and I watched the dog while $100 took some fly fishing courses.  Got in a good ride on Saturday and on Sunday I ran the 14K, which was a 5K of roads and 8ishK of trails.  Ended up running 8.4 miles in just under 69 minutes.  Ran hard and I think the fitness is definitely improving. 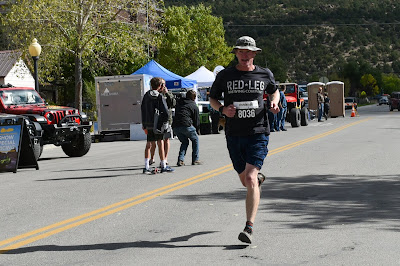 I also used the weekend to test out something new.  I picked up a packraft from Costco for $120 and took her on her maiden voyage. 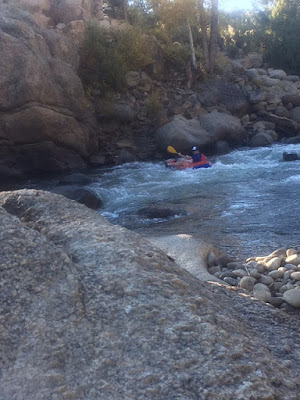 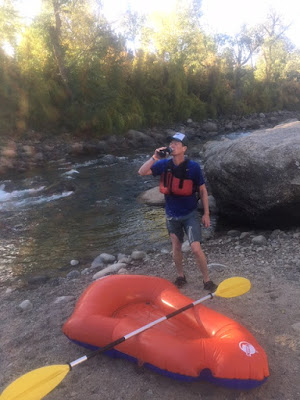 I only went about a mile, and the river was super low, and I couldn't steer the raft, and I ended up losing the storage bag that doubles as a pump, but I lived.

Biked to work on Monday, then dropped by the Triple Nickel after work to watch the Steelers finally decide to begin their season.

Been signing up for a bunch of races lately.  If anyone wants to throw down, I'll be running Cheyenne Mountain, Canya Canon, the Rock Canyon half, and the Rescue Run 10K.
Posted by brownie at 1:45 PM No comments: