Been working on getting fat and lazy for a few weeks now, time to get back on the wagon.  Thanks to Pikes Peak Sports for the pics that follow.

Saturday was the annual PPRR Turkey Trot Predict.  You predict your time and try to run as close as possible without using a watch.  Really shitty weather and lots of ice, so I went with a blazing 24:06 for my guess.  Ran steady around Prospect Lake twice and ended up running 24:14, only eight seconds off.  You'd think that's pretty decent, but it was only good for 10th place.  Only the top six win turkeys, so it looks like I'll be going hungry this Thanksgiving. 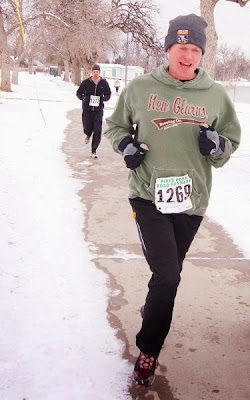 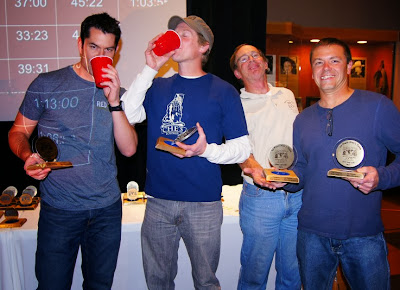 The Red Leg/CRC chick team ended up winning as well. 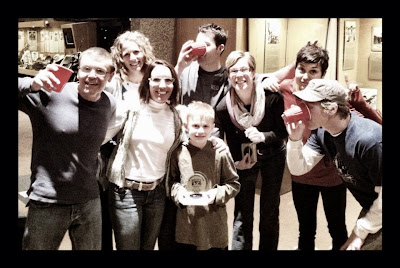 We will be putting together a team for the upcoming Winter Series, so let me know if you want to be on the team.

I usually don't run when it drops below 20F, but today was the first run of the Incline Club season so I made an exception. 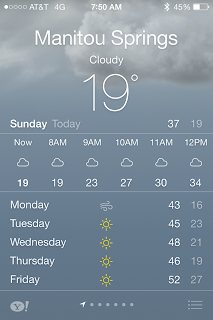 Forced myself up the Incline.  Turned out to be a beautiful day and as is always the case, I was glad I did it.
Posted by brownie at 5:08 AM No comments:

Rego'd for my second race of 2014 today - the Salida Marathon.  I've done all nine of these, and it serves as my Colorado anniversary since I moved here from Austin just before they had the first of these marathons.

FYI, the hostel is completely booked.  Acted quickly to find something close to The Vic.  Here is the view towards the race finish line from the hot tub where team Red Leg will be staying: 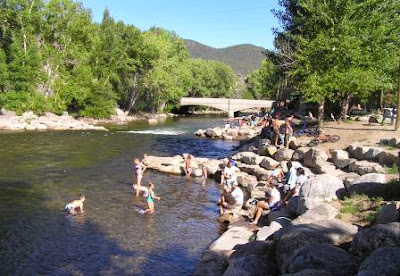 Not too shabby.  Big yard too, so look for some kind of post race/pre pub crawl party.  Hopefully we can get a keg from Red Leg for the festivities.

I will hopefully (depending on the weather in mid-March) be riding my bike down to the race from the Springs.  Had planned on riding back on Sunday, but we decided to stay in town an extra day.  So instead I'm going to try to ride up Monarch Pass and back.  Big test of the cross-check to see how she handles on touring and mountain passes.

On another note, if I had a vote for ultra performance of the year, it would not go towards any race.  I would vote for the guys who threw this drive together to get ultrarunning's biggest fan to Western States!
Posted by brownie at 7:40 PM 2 comments:

Another awesome weekend.  Drank a bit too much on Friday night so the 5K/10K double at City Park wasn't quite as fast as I hoped.  Thought I could run 20/40 or so, but ended up 22/47.  Yuk.  But it was worth the trip, as the old school race t-shirts were more than worth the entry fee.  100% cotton, zero advertisements, and this logo: 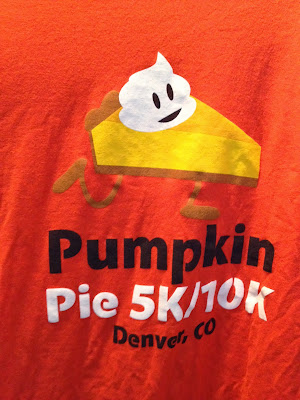 The logo looks even better at Sancho's: 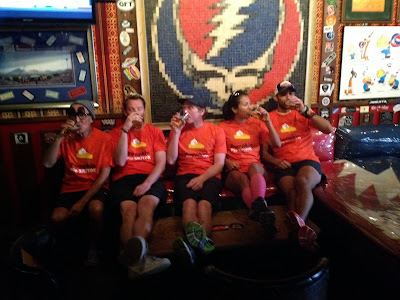 Getting wasted and trying to race didn't work out so well for me on Saturday.  So of course I had to try again on Sunday.  After lounging around on Colfax long after City Park, I ended up shitting the bed at the final Fall Series in Palmer Park.  But continuing with the weekend theme of hungover runs and awesome schwag, we got these sweet mugs: 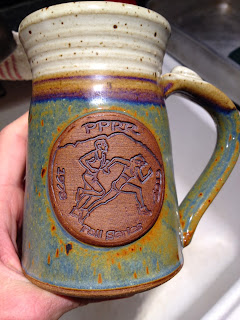 On the bright side, I did beat Mike Wardian for most races over the weekend where you didn't meet your goal.

Not much going on this week.  Taking off from any activity outside of walking the dog.  Just a quick break before the Incline Club starts on Sunday.  Still playing around with the 2014 schedule.  The motivation is pretty high to try some longer bike stuff.  But I don't have as much vacation with the new job as I used to, so something is going to have to give.
Posted by brownie at 9:07 PM 2 comments:

Good times up in Boulder over the weekend.  The IPA Fest was every bit as awesome as I hoped.  Also hit three new breweries while in town, and hit the ground about a dozen times trying to bike back to Timko's house. 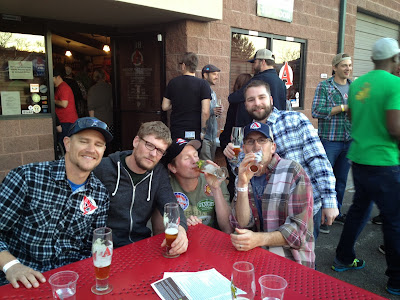 Training is going.  Basically I run hard on Tuesday and Thursday with the Sunrise Striders, and I've been racing quite a bit on the weekends.  The other days I either don't run, or just goof off with the dog.  Also been spending a lot of time at the rock gym and the YMCA.

I'll be in Denver (City Park) this Saturday running the Pumpkin Pie 5 & 10K.  Races start at 9AM.  Any of yunz Denverites feel free to drop by to say hello.  Or just meet me at Sancho's around noon.

Would like to address the idea of "mainstream" for a bit.  It's a big word nowadays in the ultrarunning world, mostly used in the same sentence as "Leadville" and "Born To Run."  If you assume that every runner who started Leadville had an average of a four person crew, there were 4,000 people around the LT100 this past year.  That's a little higher than your average Tuesday night Colorado Springs Sky Sox game.  The Sky Sox are our minor league baseball team, FYI.  Not exactly mainstream.

During the last Olympics I remember there was a big scandal over badminton.  I wonder if the die-hard badminton players are complaining about how mainstream their sport is nowadays.  And I'd guess there are millions more Americans who have heard of badminton than ultrarunning.  Remember how badly everyone made fun of badminton over that debacle?  That's what everyone would be doing to ultrarunning right now, if anyone outside of the sport had ever heard of it.

Ultrarunning is nowhere near mainstream.  Is it on ESPN every day?  Are weekly rankings published in USA Today?  Maybe the Bolder Boulder here in Colorado could be considered mainstream.  Maybe the Rock and Roll Marathons (including the half, which gets big numbers) could be considered mainstream.  If you think there's a huge national audience since Born to Run sold 130,000 copies, you need to get a friend or two who doesn't care to run hundred milers and come back to the real world.

My thoughts on Leadville: I love the race, even though I don't do it anymore.  But I also love the Rock and Roll Marathons, and Leadville is definitely the RnR of the ultra world.  It is what it is.

My thoughts on Leadville being removed from run100s.com: it's like me saying I don't like people who drink beer.  Dude tried to sue Sir Nick over 80 bucks, now he's crying about Lifetime Fitness trying to make money.

Of course, Wooten threw down a stout time this year, and rumor has it Amanda might be signing up next year.  Maybe there's a little pull for me to get back out there.

Ran really well at the Rattlesnake Ramble at Eldorado Canyon State Park (even though I lost to the guy running backwards): 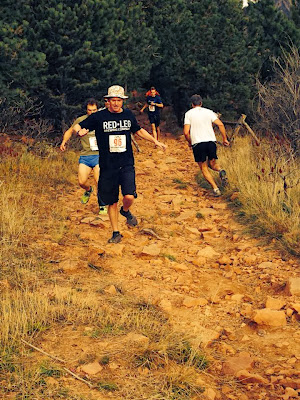 Did not run so well the next day (post-IPA fest) at the Canya Canon 7K, though I did rock the official Brooks shirt: 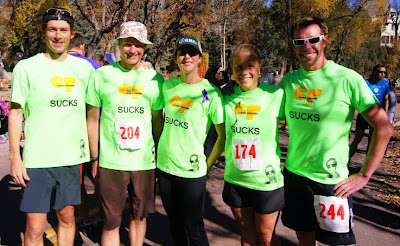 This is the last weekend before the Incline Club starts back up.  Think I'm going to finish the Fall Series on Sunday and take the week off.
Posted by brownie at 9:23 PM 9 comments: 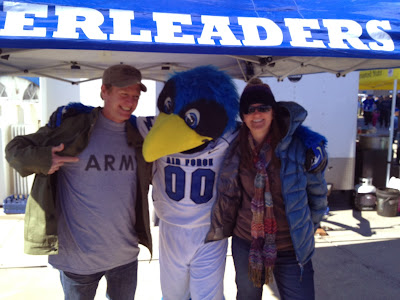 Fitting pic for Veteran's Day.  In other news, since beating Brandon means nothing nowadays, I'm putting all my energy into crushing his sister in mascot pictures.
Posted by brownie at 5:15 PM 2 comments:

193 miles (33 hours) running and 148 (15 hours) miles on the bike.  Quite a few races on the month - Epic Mountain Challenge, CC Classic, Fall Series II, the Gravel Grinder.  Having lots of fun with the shorter stuff.

Looking to race twice this weekend as well.  Saturday morning I'm headed up to Eldorado Canyon for the Rattlesnake Ramble.  And Sunday is the Canya Canon, a course on which I currently hold the Strava KOM (Rick and I are the only ones who have run the loop, and he doesn't know how to use GPS).

Of course, the main event of the weekend, if not the whole year: 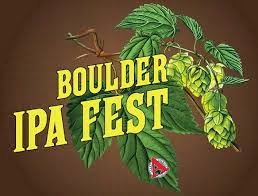 My mind can't even comprehend how awesome that is going to be.  We will be hitting some Boulder breweries before and after if anyone from that area is interested in joining us.

Stole this one from Pikes Peak Sports.  Close to the end of Fall Series III in Ute Valley Park.  I had a really good first four miles.  Unfortunately the race was five miles long.  Everyone was a winner though, since Red Leg hosted the best post-race party this area has seen in a long time. 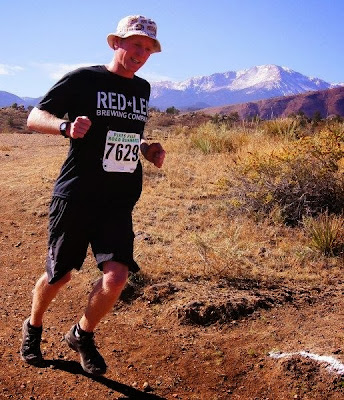 Posted by brownie at 8:57 PM No comments: