Thurs - run commute 17.  Hit the CC track on the way to the office.  Not much time so I just ran a mile as hard as I could.  5:54, not too terrible since one of the turns still has significant ice.  Now through February and my goal of one incline and one track session or race per week is still going strong.
Posted by brownie at 8:17 AM No comments:

Wow, another shitty weather week.  Who woulda thunk it.

Mon - bike commute 13.  Biking has been pretty much non-existent this month due to the super low temps.  Straight to/from work.  Warmest of my available nights so I then headed over to the incline.

Tues - run commute 16.  Real good five miler to work.  CityRock 22 at lunch.  Then some weird snow squall/cold front moved in and it was way below freezing at 5PM.  3.5 miles straight home.

On Thursday it's the G Love show at the Black Sheep, then early Friday I'm off to Atlanta to stalk Galen Rupp.  Running the Atlanta 5k on Sunday.

February has not been good for my fitness.  When the month rolled in I thought about maybe actually getting into shape for Salida.  Nope.  But hey, there's always this: 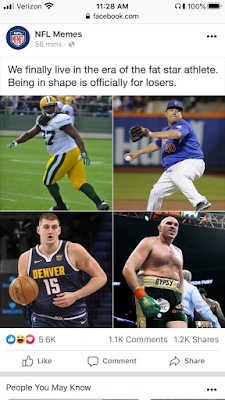 Bit hungover from Pliny the Younger on Friday, but I had one last race in the Winter Series I had to finish on Saturday.  Not a great run, but I got it done and held onto my first place age group (I think second place may have been hungover as well).  10k in 44:46.  I did lose to the 13 year old chick but beat her in the overall series.  Solid showing all around for team Roman Villa. 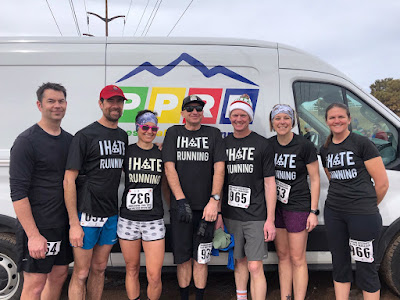 After the race we biked over to Manitou Mardi Gras and drank way too much and had way too much fun.  Needless to say my run on Sunday wasn't anything to write about.
Posted by brownie at 12:17 PM 1 comment:

Mon - track.  Holmes was a mess and there was some shitty weather moving in and I didn't have much time.  4 x 200.  Not much, but better than nothing. 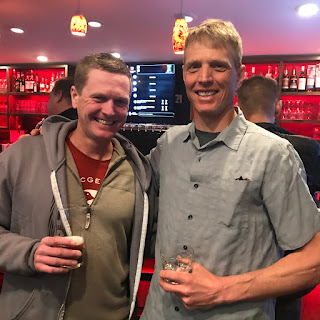 Wed - nothing.  This weather is crushing my soul.

Thurs - more shitty weather but I at least got to CityRock early for a good climb.  On Thursday evening I was supposed to go see Trump at his local rally, but by 9:30AM that place had pretty much been locked down.  No way I would have got in at 4PM when I could have arrived.  So I went and did the incline instead.

Fri - run commute 15.  And a good climb at lunch.  Finally starting to warm up.  Until Sunday, when it's supposed to snow again.
Posted by brownie at 4:27 PM 1 comment:

Our village hosted an NHL game over the weekend, which apparently upset the rich Denver/Boulder folks who could shell out $200 per ticket but still had to deal with traffic like us commonfolk.  Bummer for them.

But on Monday there was another game, Air Force vs. Colorado College.  Announced attendance of just over 7000, so it was much easier travel.  Really good time even if it was freezing cold sitting on the metal bleachers and Air Force lost the game. 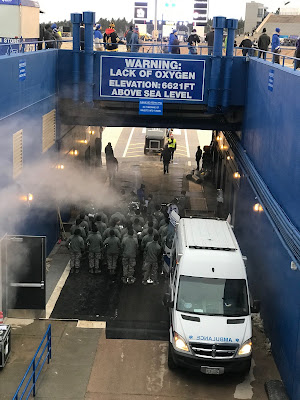 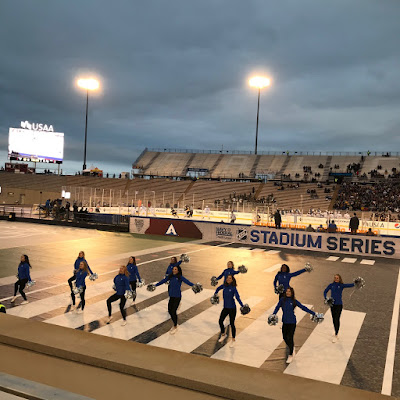 Air Force women's cross-country team was honored during the game: 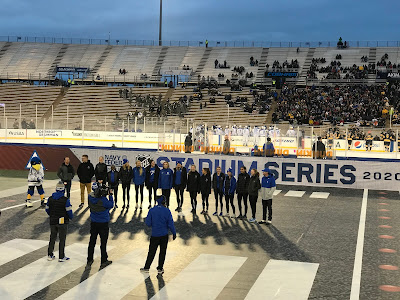 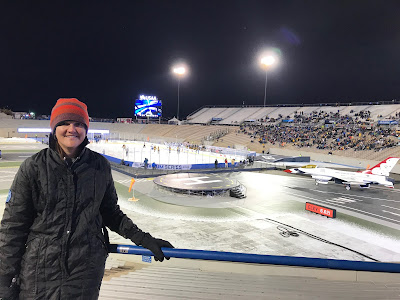 Snuck out for a long weekend in the van, a good thing since we just got hit with yet another round of big snow.

The usual Friday post-work quick drive to Florence Brewing and Oil Well Flats.  I wanted to get in a long run but the trails were muddy, so I did a road run from OWF down to the Riverwalk trail in Canon, then over to Skyline Drive.  Solid 15+ miler.

On Saturday it was off to Penitente Canyon, exploring another part of the San Luis Valley.  Great place, and it allowed us to grab an early dinner at Three Barrel Brewing.  Loved the area and we will be back, probably to climb. 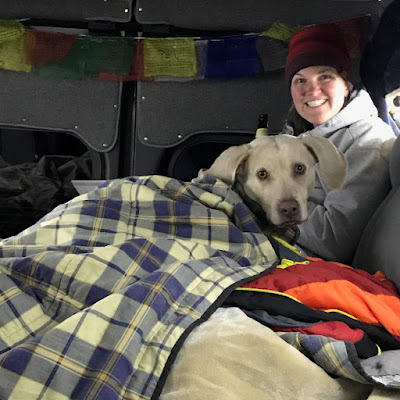 $100 did her long run on Sunday, and I spent that time hiking with the dog.  After that we headed over to Crestone.  Then the van's first trip to the UFO watchtower. 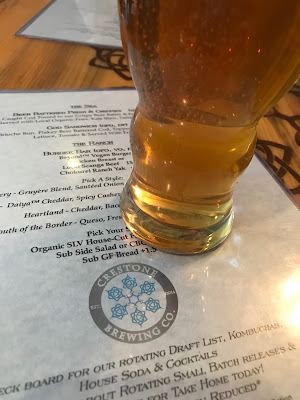 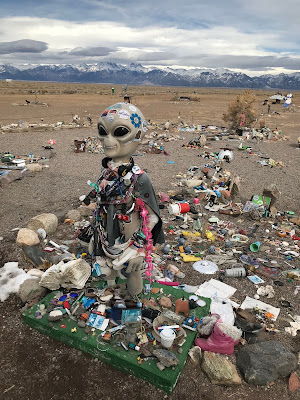 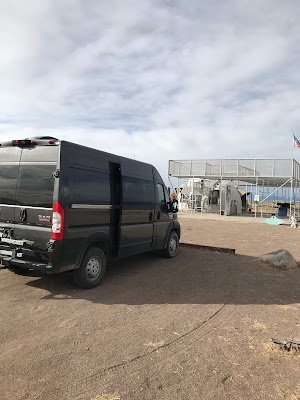 Spent Sun night at the Sand Dunes Swimming Pool, which is becoming a favorite of ours.  Up early Monday to make the trek back home to COS.  Very quick trip but we had a blast.
Posted by brownie at 1:42 PM No comments:

Staying with the recent theme, shitty weather.  I've just put away the bike for the time being.  Not warming up enough to melt the snow and ice, so everything just kind of sucks for riding/running right now.

Wed - run commute 13.  Six miles there, 5.4 back home.  On the way to work I dropped by the Colorado College track, which was over half covered in snow and ice.  5 x 400m.  Shitty workout, but at least I got my weekly trip in.  Ran through Sondermann home, and it's all snow and ice.  $100 and I had a good climb at CityRock in the evening, made even better since Red Leg is the brewery of the month there.

Thurs - we have been waking up to temps in the mid-teens for a few days, including today.  I slept in and after a quick dog walk hopped on the bus to work.  After work I had to force myself over to the incline, unable to put it off since we'll be leaving town Friday after work.  As usual, after the slog up Ruxton the incline became a fantastic place to be.  I guess it's been so cold the snow hasn't had a chance to melt during the day, so there's not a whole lot of ice right now.  Plus, there was a nice inversion and halfway up the incline I found myself above the clouds.  Only saw one other guy the entire loop.  Ended up at the Manitou Legion drinking hot toddys with the owner of Trinity Brewing after the run.

Fri - bike commute twelve.  16F when I got up, but it was winter bike to work day, so I met some co-workers at Loyal Coffee to take advantage of some freebees.  Woke the klunk up from hibernation for the ride. 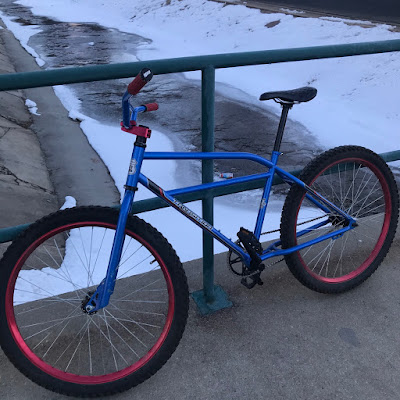 Oil Well Flats for Friday night, then off to the San Luis Valley to enjoy the long weekend.
Posted by brownie at 9:04 AM No comments:

On Sunday I got to go ice climbing for the first time ever.  Was not expecting to enjoy it but I had a blast.  Went out to Camp Alexander where they have a beginner ice block.  Some pics from the day (none of which are of me): 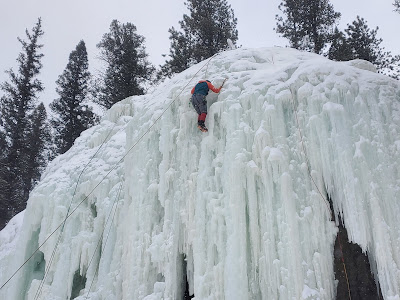 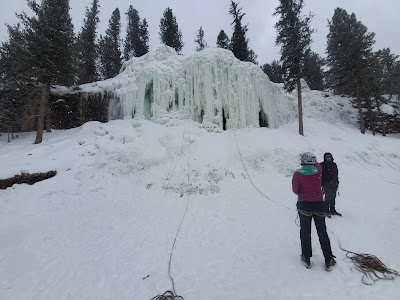 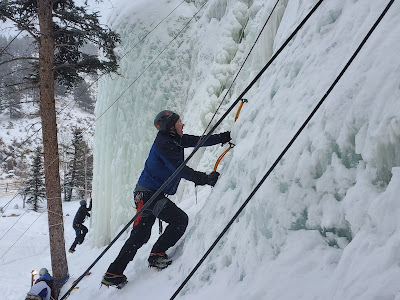 Completely unrelated but here's something for Bob and Padre:

On Friday after running home $100 and I went over to Fossil before heading to Lulu's to catch Zach Deputy.  They had cheap Utica Club at Lulu's!  Zach put on a great show, really hoping Lulu's stays open. 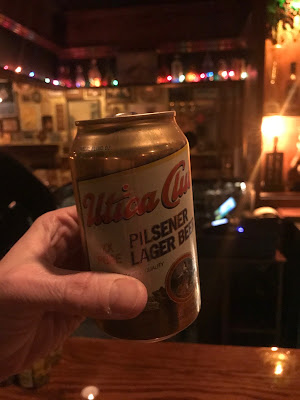 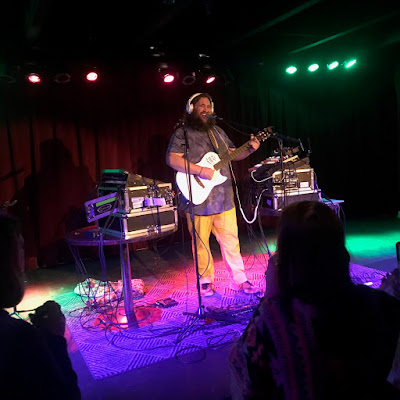 Saturday was the third installment of the winter series.  We are going through some terrible weather here in COS, and I'm barely hanging on to any fitness.  The past two winter series races have saved me as I've been able to get really hard efforts in.

Here I am battling mini-Kara Goucher in the first half mile of the race.  She would hang with this pack through 1.5 miles before having her hopes and dreams crushed. 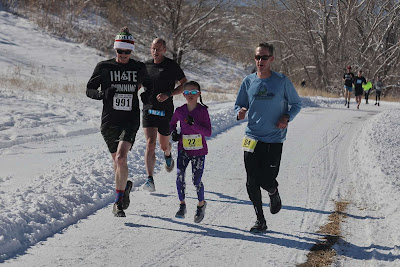 Wes made decisive move on a hill around 2.3 miles into the race and I was unable to counter.  Ran 6:19 and 6:14 for the final two miles (downhill) but I just couldn't catch back up.  Did put a good chunk of time on Richard though.  33:37 for five miles.  Thanks to Peter and Tom for the pics. 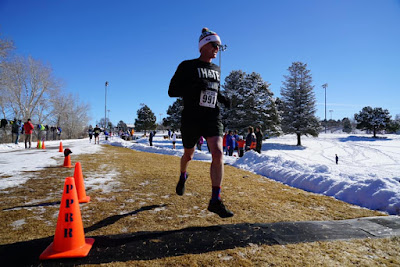 After the game we hung out at Lost Friend Brewing for a bit before heading up to The Hill to see Air Force Hoops take on #4 San Diego State.  As an added bonus, I got to achieve a life long dream of seeing the Cheese It Bowl trophy in person.  Air Force hung close for most of the game but gassed out over the final few minutes.  San Diego State is solid but I have a hard time believing they're the fourth best team in the country. 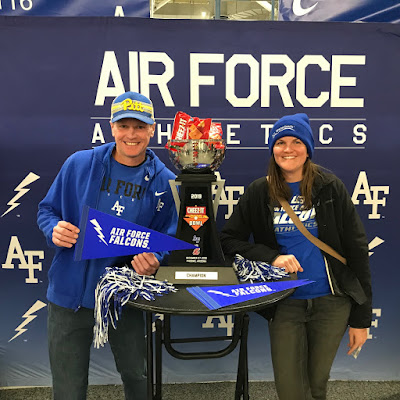 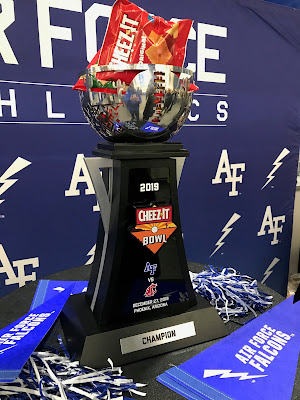 Posted by brownie at 8:34 PM No comments:

I am really glad all my Austin buddies survived the snow.  Here's a shot a friend sent me of how bad things got down there: 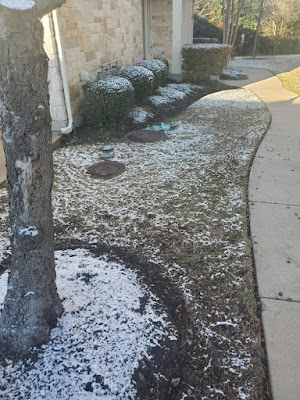 Wed - run commute eight.  3.6 miles to work.  Ended up hitting Cerberus Brewing on the way home and mooched a ride off the wife.

Fri - another round of good snow last night.  Felt like Rocky trudging through six inches of powder on the Midland Trail.  Of course as I'm about to get off the Midland and head downtown, the plow comes along to clear the thing.  Good CityRock climb at lunch.

Another shot from winter series two, courtesy of Tim B.  Notice Wes behind me.  He stayed there all race. 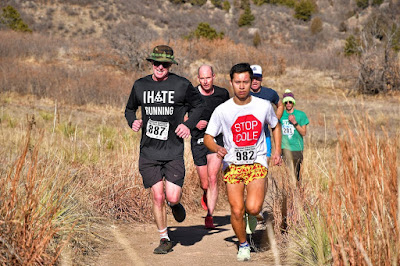 Lousy weather week.  Significant snow and temps way below freezing.  Thankfully Punxy Phil says there shouldn't be too much more of this shit.

Tues - lot of snow this morning.  Took the bus to work.  Good climb with my buddy Mike over lunch.  After work $100 and I did the incline.  I drop her off at the base and it was 9F.  Great night to climb though, and the snow was fantastic on both the steps and Barr.  I assume after today the conditions over there will be terrible, so I'm glad I got in my incline for the week.  Manitou Brewing afterwards to celebrate.
Posted by brownie at 6:31 AM No comments: