Did run to work last Thursday, keeping the streak alive.

Today was a quick five miles to work, 54 minutes (stopped for bagels).  Once again, it's friggin' cold out in the morning.

Heard this nugget on the way to work today.  Is there a more awesome combination than Cake and the Muppets?

Got in touch with Amazon.  I asked them if they could blow up the Kindle the next time someone turns it on. They couldn't do that, nor could they locate it via GPS, but they could shut it down permanently.  So at least the thief can't use that anymore.
Posted by brownie at 8:07 PM No comments:

How to properly pass cyclists on the road...

I mean, you have to let the bikers know you're behind them, right?

And it happened in Longmont!  I would have bought Brandon beer for life if this had been his hummer.

I will not believe cyclists use any sort of common sense concerning traffic until the local guys quit riding on Manitou/Colorado Ave west of Benny's.  If they were truly concerned about traffic issues, they would ride on Pikes Peak Ave (no traffic) or the new paved bike path that was built.  Their actions are not meshing with their words.

And yes, the two cyclists in this video are obviously on PED's.
Posted by brownie at 9:46 AM 7 comments:

Easy 6.4 miles on the Garden roads this morning, 60 minutes.

Will get up a Steamboat post soon.  Had a blast, though I didn't get to pace.  Did drink a ton of beer though.
Posted by brownie at 4:50 PM No comments:

Brandon S posted his video over here.
Posted by brownie at 5:37 AM 1 comment:

Easy ten miles on the Garden roads this morning, 90 minutes.  Maybe the Mitchell thing lit a fire under my ass, seems I'm finally getting a bit of motivation back.

I'm a huge Pearl Jam fan, but didn't care for one of their biggest radio hits, Just Breathe.  Until I heard Willie sing it.

1:34 at the Denver half yesterday.  Nice race up there in Cherry Creek State Park, though I'm a bit bitter that the day after I signed up at full price a groupon came out.  Given recent training, I was hoping to break 1:40, so the time off a pretty easy effort was a bit of a boost for me.  The half capped off a whopping 43 mile week for me.  Results showed the winner in 62 minutes, and unless someone cut a huge portion off the course that is a typo.

Looks like I'm in for the Mt. Mitchell Challenge!  Failed at the lottery last year but my luck held up this time. A bit different for me, as I usually spend the winter months trying to train for a fast road marathon in early spring.  Lots of post-NYC Incline Club for me this year.  Probably shoot for a sub seven hour time, though I gots to research that a bit first.  Stole this here elevation profile off irunfar.com:

Looks like a great weekend coming up.  I'm off to Steamboat Springs to pace Slow Aaron the final 28ish miles of Run Rabbit Run.  Hopefully those miles aren't anything like his final five miles at Lake City, though it would be pretty cool to see someone throw up watermellon through his nose.

I know it's early, and I can't remember if I posted the date here already, but the Springs Fat Ass will be on January 19th this year.  Due to the fire and the closing of Waldo Canyon, the new route will be based off this post from O'Day.
Posted by brownie at 8:19 AM No comments:

Despite the robbery, I did run to work yesterday.  Five miles there, five miles home.  On the way home I dropped by a pawn shop and ran near some of the local homeless camps, but no luck.

Running has not been a priority for me since Pikes, and possibly even Hardrock, and it's showing in my training.  If I don't get my act together soon I'll be looking at re-adjusting my NYC goals once again.
Posted by brownie at 9:33 AM 2 comments:

Had my bike ripped off, report on that over at Pikes Peak Sports.

Watching craigslist, notified bike shops, pics are out among the bike community.  But it's a lost cause.  Going to file a police report, but it's more for statistical purposes, maybe help get another patrol or two through the neighborhood.  Bummed, but I can get another bike.  More weirded out that some dude was in our house uninvited. 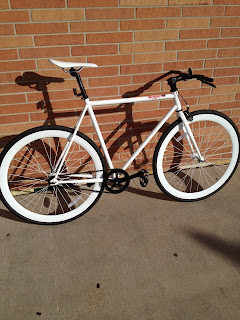 Phish was amazing, even better than I hoped.  But today isn't turning out to be a very productive first day back at work.  Haven't run since Friday and I'm not sure I'll make it out today.  Ugh.

Did enter the lottery for the Mt. Mitchell Challenge, should find out on Wed or Thurs if I'm in.  Will really shape my early 2013 stuff one way or the other.
Posted by brownie at 1:45 PM 2 comments: