if it ain't one thing it's another...

Still failing miserably at trying to get back on a routine. Wednesday is my normal run to work day. Got up early enough. Took the dog out for a walk before the run. Then right behind out house, about 30 seconds before the walk ended, the dog took off after a skunk. So I spent the time I would have used to run to work showering the dog instead.

Nice shot of Upadowna and the Runcolo team from the Mango's throwdown at the finish of stage four. 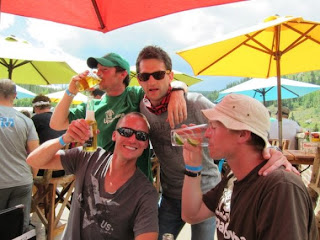 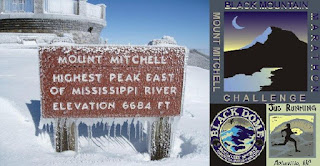 Already starting to think about 2012 and what it's gonna hold. On Thursday I'll be entering the lottery for the Mount Mitchell Challenge. If I get in it'll provide plenty of motivation for the shitty winter running months. Besides the race, I'd be able to knock out four state highpoints on that trip.

Then I'll be returning to the usual awesome weekends - Salida, Jemez, San Juan, and the Grand Canyon. Think we're gonna do a different take on the Canyon this year, over on the Havasupai Falls side.

Will be looking to run two hundreds as well. Hardrock and Moab.
Posted by brownie at 7:12 PM No comments:

Ugh. Horrible workout. 10 minute warm up, 2 x 1 mile with 400m RBI, 10 minute cool down. 5:53, 6:05. Thought it would be a great workout after the first mile. Then Darrold came to watch, so mile #2 was all done in lane six. I'd like to think I bailed to avoid any problems with the caretaker, but in reality I just pussed out today. Gor blimey, I'm a long way off from challenging that marathon PR.

Good article over here on hashing in San Francisco. Hung out with those guys during my last visit, great bunch of peeps!
Posted by brownie at 7:01 PM No comments: 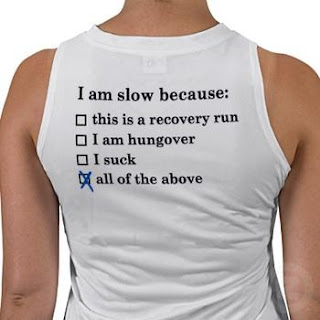 AM - Three miles with the dog, 30 minutes. She didn't feel like running and that always makes for a very slow morning.

This pic has been making the rounds. Maybe by posting it Nick will swear never to talk to me again, and I can get out of buying him that beer I owe him from the NOLA/Salida bet. Still waiting for the letsrun post of "those guys all suck and if Sammy Wanjiru were alive he'd run UTMB in four hours."

Just got this in an e-mail:

"Letting everyone know that my car was vandalized last night (Saturday, the 27th). There was what looked like a can of tomato sauce poured over the back window and sugar poured into the gas tank. We're at Pike and Water. Very discouraging..."

Gangsta rappers are gonna start writing songs about life in the 'hood of Pleasant Valley!

Off to an end-of-season runners party. Hopefully there isn't a drive by shooting...
Posted by brownie at 1:00 PM No comments:

Ass early this morning the dog started going nuts. Usually means there's a bear outside. So of course I got up to go check it out. Out to the back yard and nothing. But something is going on, as all of the dogs were barking.

On my way to bed I noticed some cars out front across the street. Very unusual for this time of night. I look closer, and there are three cop cars out there, as well as an SUV in the yard of the house directly across from mine. Read the police blotter here.

I'm pretty sure the dogs were barking at the perp in question as he fled. Given the layout of the area, the dude ran down around Sean's house, then up the alley past this house.

I'm not worried about the shotgun toting lunatic, but I'm fairly upset that there was a party in the neighborhood and I wasn't invited!
Posted by brownie at 9:45 AM 4 comments:

Little more enjoyable this time around. FF was having a slightly better day at Leadville than at Hardrock. I picked him up at Twin Lakes inbound and handed him off to Lucho at Mayqueen, about a marathon worth of running. We were pretty steady the entire way. Tim had gone through a rough stretch coming back over Hope Pass and was well behind his goal of a sub 20 when I picked him up. Tried to get him back on track, but he was just in too big a hole. Still, during the 26 miles we ran together, he did make up some of that time. And he really killed it during one of the most boring stretches of the course, from Treeline to Fish Hatchery. Really solid climb up Powerline too, holding off what we then believed to be a hard charging Dan V. And on the final few miles on the Colorado Trail leading to Mayqueen, I had to run my ass off to avoid being dropped.

Got to Mayqueen and Lucho handed me a pounder of PBR and I collapsed into a chair, fully spent. Really glad that he jumped in so I didn't have to take Tim to Tabor Boat Ramp, not sure I could have kept up. Though it would have been fun to see Brooks curled up in the fetal position, throwing up all over himself.

FF finished in 20:59. It's an incredible time, even more unbelievable when you see it was his fourth hundred miler in two months.

Got to spend a little time at the finish line, lucky enough to see Brendan, PG, and Brooks finish. Still catching up on all the stories, lots of heroics and heartbreak out there. Big kudos to all who got after it! 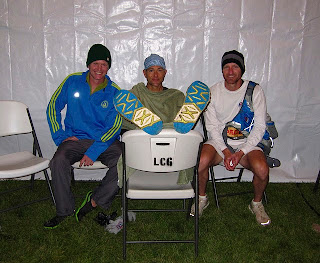 Posted by brownie at 9:03 AM No comments:

Not what I wanted. Was on 2:59 pace to the top of the W's, but for some reason I was spent already. Weird, since I've been running that pace during workouts for the past few weeks. I started hiking, and probably walked 85% of the trail between the W's and mile eleven. Ran almost all of the final two miles, due to the fact that I caught a pack of Josh J, Mike Safari, and Amanda. Poor race but passing those three shit talkers and crushing them up the rest of the mountain took some of the sting away. Like my hero and mentor Keith says, "It's not always about how good you do, but how shitty your friends do."

3:21:xx. Will be back next year to go sub three, hopefully twice in the same weekend.

Sunrise Striders have a new website over here.
Posted by brownie at 3:04 PM No comments:

Still here. Yeti and I finished TransRockies. Great time. Felt more like a hash weekend with a few epic ballbuster trails than an actual race. Will do an in-depth report soon. Incredible week, with the Ascent, pacing Footfeathers, and TR. Met a ton of great people along the way.

Still need to catch up on all the Leadville and Pikes Peak results. For those who didn't hear, I crushed Amanda at the Ascent. 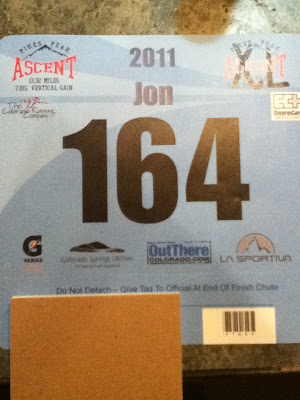 Good thread on the letsrun boards over here. Much more interesting than trying to figure out what fast guys are running the Ascent on Saturday.
Posted by brownie at 3:31 PM No comments:

Really just started planning for the next weekend. Should be pretty fun:

Easy run to work. 5.7 miles, 54:18. Very productive run - dropped some clothes in the donation bin, returned a library book, and picked up breakfast along the way.

Forget all that stuff about my running being in a funk. Just PR'd on my Garden loop by over a minute. 7.5 miles on muddy trails.

Got my tix to Madison today. My first trip to Wisconsin. Gonna catch the Pirates/Brewers, and maybe find some cheap yellow beer to drink.

Also looking at a 120 mile week at TransRockies to jump start things. But Yeti has been using crossfit to train, so I have a feeling I'll be longing for the day FootFeathers and I averaged a speedy 1.5 mph in the mountains.

Starting to look into some big things for next year, which hopefully end with another shot at Hardrock...
Posted by brownie at 5:11 PM 1 comment:

Thurs PM - 45 minutes up Barr Trail. Wanted to make it to the 7.8 sign but lightning chased me back down. 37 flat to the top of the W's, slightly over three hour Ascent pace. Felt pretty easy. Then hit Kinfolk's, the Royal Tavern, and Red Rock Lounge. Bit hungover today.

Be sure to vote over here.

I believe my phone will receive text messages, but will not send them. That's what you get for $35 a month nowadays. Going to try to hold out until t-mobile gets the iPhone...

Final Incline Club Thursday workout of the year, a time check to either Ruxton or Hydro. Big anniversary, as three years ago I actually beat Matt at this workout. Yes, if I'm all out 120% and he's cruising around 40%, and the distance is under a mile long, and it's not too hilly, I can take down the King.
Posted by brownie at 4:50 PM 4 comments: 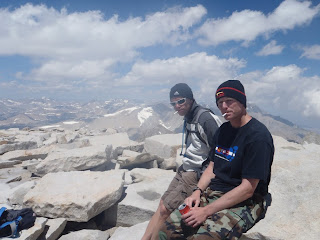 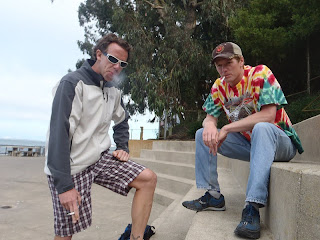 Think I smoked an entire pack during the San Fran trip. The high cost of cigarettes doesn't hurt so much when you bum 100% of your smokes off BLOS.

The bottom pic is us in the old smoking yard at Alcatraz. When The Rock was open, inmates would get two packs of cigarettes a week regardless of whether they smoked or not.
Posted by brownie at 3:49 PM 6 comments:

Wed AM - Didn't have to get to work until late, so I ran the half marathon route from my house. Hike and bike to downtown, north on Santa Fe to Sinton, than back through the Garden. 13.1 miles, 1:52.

Pirates winning streak is over.
Posted by brownie at 1:13 PM 1 comment:

Heard a ruckus around 3AM this morning in the backyard. The dog started going apeshit. Went outside ready to kick some ass and found a bear going through the neighbor's garbage. I spared him the ass whooping since I'm such a nice guy.

Pirates are on a one game winning streak!
Posted by brownie at 7:48 AM 5 comments:

6.2 miles in an hour this morning. Nice, easy stuff around Old Colorado City. The body is feeling good after so much rest, hopefully my liver can catch up sometime this week.

2.5 months until the Wisconsin Dells marathon. Really going to try to bear down and work hard to run fast there. Quit laughing. Serious training starts tomorrow morning with some mile repeats at the Manitou track.

Lots to catch up on. Six national parks in the past week. Another marathon, another state highpoint, another hash. Multiple breweries (very disappointed I didn't run into Ryan or Meb when we were at Mammoth Brewing) and dive bars. Awesome goofing off in San Fran, including a bench clearing brawl at the Phillies/Giants game.
It was my 22nd marathon. My 12th state. See the race photos here. Not really impressive considering I ran into a guy at the In-N-Out Burger who had completed the 50 states and said San Fran was his 151st marathon. Damn, I'm not even the top dawg at a fast food restaurant.
Badwater and the JMT are on my to-do list now.
More later, $100 is yelling at me to unpack.
Posted by brownie at 8:37 PM 3 comments: 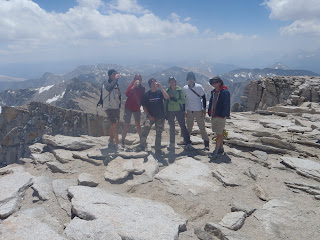 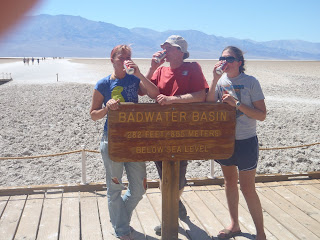 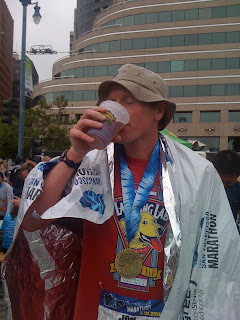 First mile in seven flat. Second mile at 14 minutes. Third mile in 25 minutes. Ouch. Wasted four minutes in the crapper there and after that I didn't go after a great time. Still had a lot of fun touring San Francisco on an awesome (and difficult) course. Drank two beers and quite a bit of whiskey during the second half. Stepped on Barry Bonds's head in the final mile just behind Candlestick Park. I hate Barry, but even if I tried my stride isn't long enough to get around that enormous steroid exploded noggin. 3:20:59 officially. Without the crapping and drinking I'm close to 3:09 with a minimal effort. Lots of work to do before Wisconsin Dells...
And yes, that is a tie-dyed Haight-Ashbury finisher medal!
Posted by brownie at 10:20 AM 3 comments: