Finally feel like I'm getting back into a routine after our hike.  Took a while.

Mon - run commute 38.  Actually mooched a ride downtown to Kings Chef with Bob, but I did run home.

Tues - run commute 39.  The run to work included 3 x one mile with five minutes rest in between.  I do these on the roads and I don't really pay attention to the time, I just make sure I'm running hard.  They were all well under seven minutes depending on traffic and stoplights and whatnot.  CityRock 94 at lunch.

Wed - bike commute 40.  Straight to CityRock in the AM to throw some weights around and do some bouldering.  On the way home I climbed Cheyenne Canon, which I am not in shape to be doing but with the Royal 50 looming I need to pedal more.

As much as I can't stand children under the age of 27, the wife and I have done an old college roommate of mine a favor and adopted his niece under the Air Force Academy cadet sponsorship program.  We are having her and her parents over on Saturday after the Air Force/Stony Brook football game.  I am going to try to get her to transfer to Pitt, or at least Army if she doesn't have the qualifications to get into that prestigious school.

On Sunday we are going to head out early and take a drive (no hiking as we'll have the dog) through Rocky Mountain National Park before heading over to Fort Collins for a brewery tour and the Fortitude 10K on Monday.  We are planning on a late lunch Saturday at Lumpy Ridge Brewing and a brewery tour in the Fort on Sat evening if anyone is around.
Posted by brownie at 10:50 AM 2 comments:

Took a class on lead climbing from the Colorado Mountain Club and it went well.  My two biggest days of outdoor climbing yet.  And I didn't fall to my death.  I can't wait to climb something that isn't slab.  Everyone on the ground yelling, "trust your feet," but I don't trust my feet (which will stick) and I don't yet trust the gear to keep me from falling (which is bombproof) so it's just a constant raging fear of impending painful death for me. 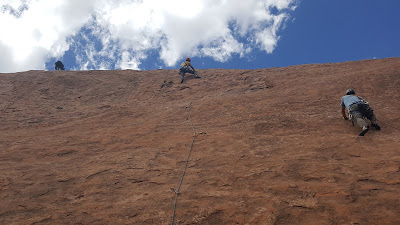 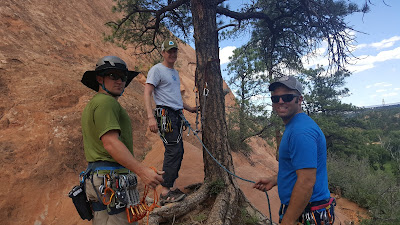 Posted by brownie at 8:54 AM No comments:

Mon - bike commute 37, including a longer ride home to stop by Garage Run.  CityRock 91 at lunch.

Wed - run commute 37.  Legs still sore from the Double, mostly from running down the mountain.

Fri - drank a few too many beers at Fossil on Thursday night but I still forced myself out of bed for a 1:15 dog hike in the Garden and a trip to Accolade.

Going climbing this weekend.  Red Rock Canyon on Saturday, and then possibly Shelf Road on Sunday.
Posted by brownie at 4:26 PM 2 comments:

so how much did it all cost?

First off, I want to point out that this is what we spent and it is not at all a guide to what it costs to do the Colorado Trail, or any thru-hike.  I counted the price of gear as brand new, even though I had most of the stuff already and continue to use almost everything.  The high costs of zero days were often two or three nights in a nice hotel, eating at restaurants three or four times a day, often footing the bill for friends who had helped us out.  And the bars, well, we drank a lot at times.

Total for that, which is all you'd need to do the hike, is $2226.80.  $4.45 per mile.  Probably not a whole lot a normal hiker could do to get this cost significantly lower.  Big four and base weight was for me, mail and trail food was for the two of us.

Of course there were the zero days.

The zero day total comes to $4103.88.  Obviously there might be some ways to trim this part of the budget down a bit.  Not going to every town, not spending multiple nights at every town, not trying to drink all the beers and eat all the pizzas and cheeseburgers at every town, I could see this number drop to under $500 pretty easily.  I'm sure some spend much less that that.

Pretty good weekend for me and much better than I expected it would be.

Still in shape from the Colorado Trail so I knew finishing wouldn't be an issue, I just thought it would be slower than usual.  Told $100 to plan on four hours on Saturday, then another four hour ascent followed by a three hour descent on Sunday.

Saturday, of course, was a wash as they ended the race at Barr Camp.  I was pleasantly surprised at how my day went though.  I was able to run around 70% of the course, much more than I thought I'd do.  I ran 1:49:55, though that includes a ten minute break when I stopped about 100 meters from the finish line to have a beer.

On Sunday things went well once again.  Got to the summit in 3:47.  The downhill hurt like hell as I have not done any downhill running in a long time, but my down split of 2:17 was not my worst ever.  Finished in 6:03.  For some reason I'm already excited for next year.

Still trying to transition back to a runner from a hiker.  Been spending a lot of time in the gym, whether Accolade or CityRock.  Plus the usual running/biking to work.

$100 and I caught David Lowery and Johnny Hickman (half of the band Cracker) at Bristol on Sunday.  Great show. 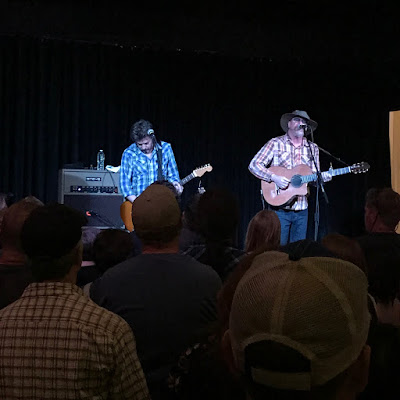 Hit the DIM hash on Monday.  It had been quite a while since my last hash.  Short but fun trail through Red Rock Canyon, beginning and ending at Fossil. 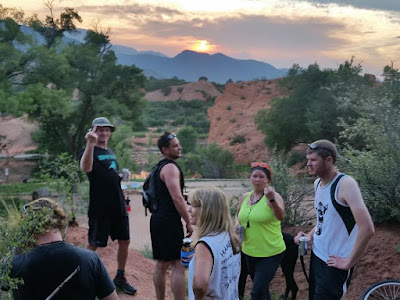 Posted by brownie at 4:37 PM No comments:

At some point I will post some more stuff about our Colorado Trail shindig.

I went about seven weeks without shaving.  Here's the final result.  My selfie game is only slightly stronger than my beard game. 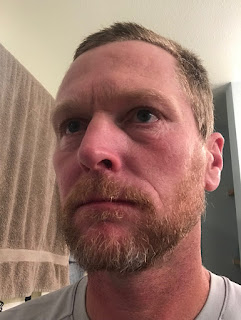 Still took a while to shave it all off. 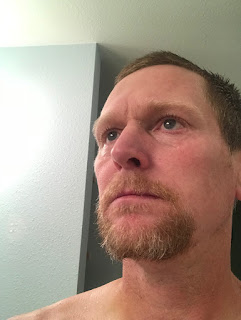 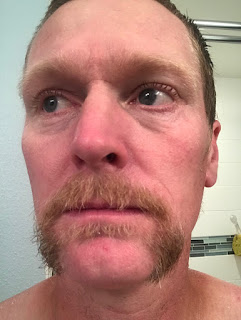 Being summer I was not able to achieve a life goal of posting a pic on the ice beard runners FB page.   But I did get to drink a few beers with the king of bearded runners, who wasn't very impressed with my facial hair. 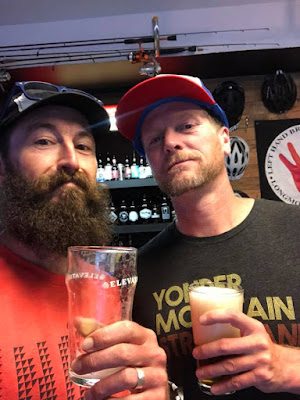 Hit the road in the van with $100 and the dog on Friday and we headed back down to Westcliffe (night outside #34).  We met Kircher down there, and he and I were going to hit a 14er or two on Saturday.

We decided to do Crestone Peak and Crestone Needle.  Crestone Peak ended up kicking our ass pretty good and we ended up doing just that peak.  Not a bad way to spend a Saturday though, getting your ass kicked in the mountains.  My watch ended up clocking out at 19 miles and eleven hours, and we still had at least another mile to go.  Other than a 45 minute break at the top, we were moving the entire time.  My 34th Colorado 14er.

The long approach.  That's Kircher leading the way with Crestone Needle in the background. 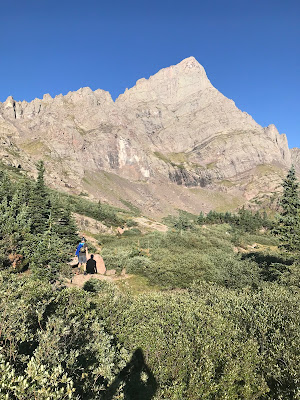 Saw a bunch of mountain goats on our way up to Broken Hand Pass.  Another 14er, Humbolt Peak, in the background. 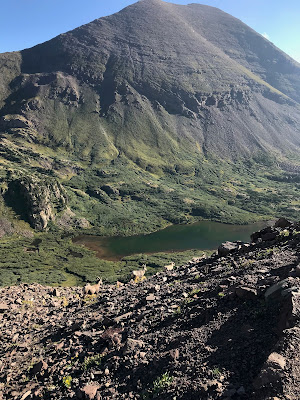 The top.  Helluva climb to get here.  Really pushed the line between steep scrambling and actual rock climbing. 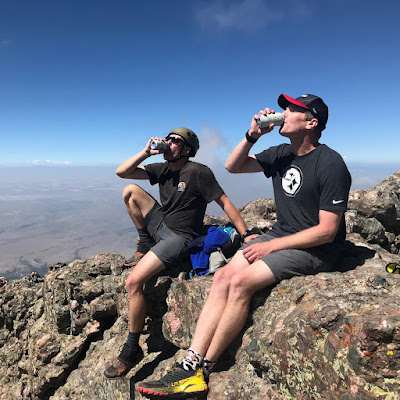 Another view from the top. 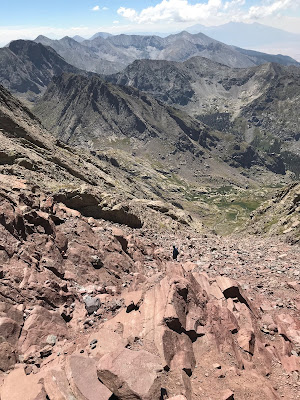 On the way down. 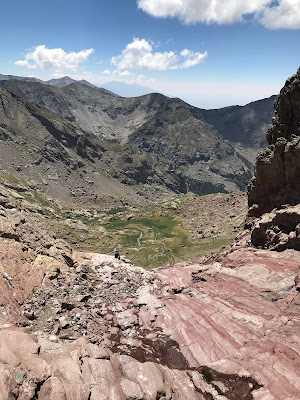 You can see a red streak going up the mountain, that's what we went up and down.  Crestone Peak just to the left as you look at this pic. 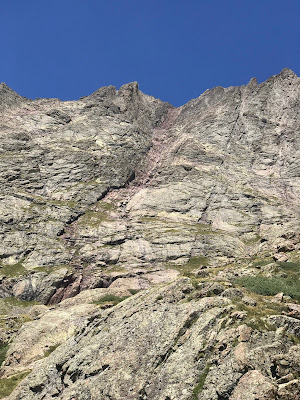 Broken Hand Pass.  Sketchiest part of this hike, of which there were many sketchy parts, was the climb just to the east of this pass.  Lots of potential to get skulled by falling rocks. 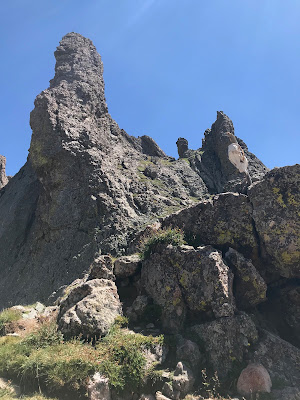 Not that I had a choice, but I dove headfirst back into the real world and am slowly getting back into a routine.

Sunday -  very hungover, but did get outside.  2.2 mile dog walk, 7.3 mile run on the Garden roads, accolade 28 and an hour of hot yoga with $100.  Also did some meal prep for the upcoming week and was around normal food for the first time in eight weeks.

Tuesday - 2.3 mile dog walk followed by run commute 34.  The run to work included 2 x 2 miles with a five minute jog in the middle.  CityRock 87 at lunch.  More hail today, though not as devastating.  Note that the westside didn't get any of the damaging weather that has been reported on around Colorado.

Wednesday - bike commute 34, including 14 miles home.  Was hoping to hit Red Rock Canyon but the trails are pretty muddy.  CityRock 88 at lunch.

With the help of a friend we are hoping the van is back up and running and plan on heading to Westcliffe this weekend.  Then Pikes.  Then I have a class through the CMC on lead climbing, including placing the gear required to stop a fall.  So I'm keeping busy.
Posted by brownie at 1:21 PM 2 comments:

back to the grind

It's been a fantastic six-ish weeks but I return to work on Monday.

The week off was a blast, but I spent it eating junkfood and drinking way too much.  So it will be good for me to get back into the routine of hour long workouts before and after work and climbing over lunch.

I did get up Pikes on Saturday, via Elk Park.  It wasn't pretty.  I'll get the double done but it's going to take a while.

The focus now is to get ready for the JFK 50 in November.  23 miles running last week.
Posted by brownie at 8:54 PM No comments: