Computer has been on the fritz, so a little less blogging than usual.  Ordered a new one and it will arrive today, just in time for me to toss it in the corner so I can go drink beers and ride bikes.

Assuming I don't wreck at the Grand Junction Off Road, I'll hit 200 miles running and 300 miles biking this month.  I like that combo and I'll keep it during the summer months, as it allows me to get into decent shape without wrecking my body.  Been running mostly roads due to the messy trails, but it's time to start getting in some climbing if a sub three at Pikes is going to be possible.

Went camping down at Lake Pueblo over the holiday weekend.  Nice to see the sun again.  Got in a good 40 mile ride on the trails down there, and drank a bottle of Stranahan's and a ton of beer with $100 and some friends.  Good times!  Days two and three of the Semi-Rad camping challenge. 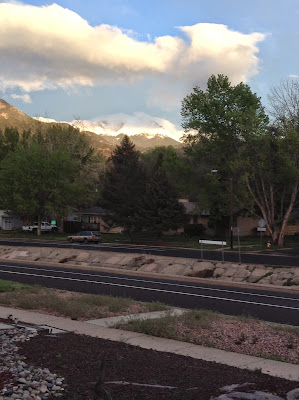 I should take a photography lesson from Timko or Boyak on how to shoot Pikes from my yard. Despite the shitty pic, you can see the mountain has a ton of snow on her for late May.
Posted by brownie at 6:02 AM 1 comment:

Wed PM - Easy 10K on the way to Fossil Brewing.  It was raining.

Thurs AM - Easy 10K on the Garden roads.  It was raining.

It's been raining here.  A lot.  Only one day this month where the airport (where we get our official city tally) hasn't recorded any rain.  How the hell do people in Seattle live like this?  We have received six inches of rain so far in May.  Camp Creek has held up well, and our basement is bone dry.  Red Rock Canyon, however, took a beating.  A retaining wall on a pond broke and all the water rolled downhill.  Going to take some time to clean that up.  Part of the Garden is wrecked, and a good chunk of the Midland Trail that I ride to work everyday is pretty jacked.  Ugh.

My routine has been messed up lately due to my office moving.  I'm no longer downtown, but about 2.5 miles north of my old office.  An extra ten or so minutes on the bike.  Doesn't sound like much, but I had my old routine dialed down.  Did ride to the new office for the first time today, number eight on the month and 49 on the year.  Not sure if I'll keep riding as much, as now we have access to a shower and I might bring back the run commute.

Ran the Run To The Shrine on Saturday and I am definitely not in climbing shape.  Would like to work on that, but Barr Trail is either a sloppy mess or covered in snow right now.  Was feeling pretty bummed about my fitness until Sunday when I opened the Colfax relay running 40 flat for a 10K and having it feel super easy.

Hoping to sleep outside this weekend as I have accepted semi-rad's camping challenge.  I was able to sleep out on our back porch last Thursday.

We were planning to go to Buff Creek but I hear that's under snow.  We're now looking at either Lake Pueblo or Canon City.

Such a depressing post, but I'm having fun despite the shitty weather. 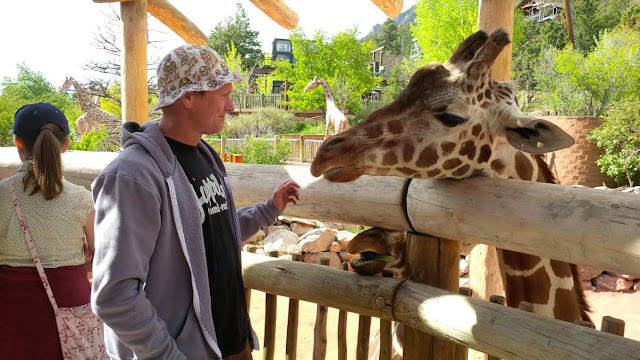 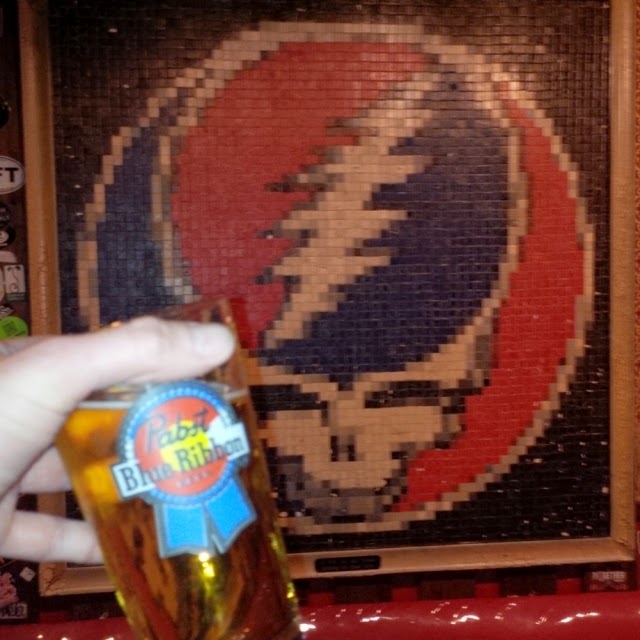 Tues PM - Five miles through the rain on the Garden roads.

Cheyenne Canon on Sunday.  It was like January at the top.  Cold, with snow everywhere.  Wanted to go up and down twice but when I got down the first time, I didn't want to visit the arctic conditions again so I bailed.  6.4 miles.

Pulled off a double on Monday with 6.4 miles in the morning and five in the evening, all on the Garden roads.  First day in a long time we really didn't have any rain.

Seven miles on the Garden roads on Tuesday morning.  Threw in a few 3 x 3 minute fartleks.  Wanted to hit the track but I'm sure it's a mess.  After the run was the first time I've seen Pikes since I got back from NOLA last Monday night.  Lots of snow up there for mid-May. 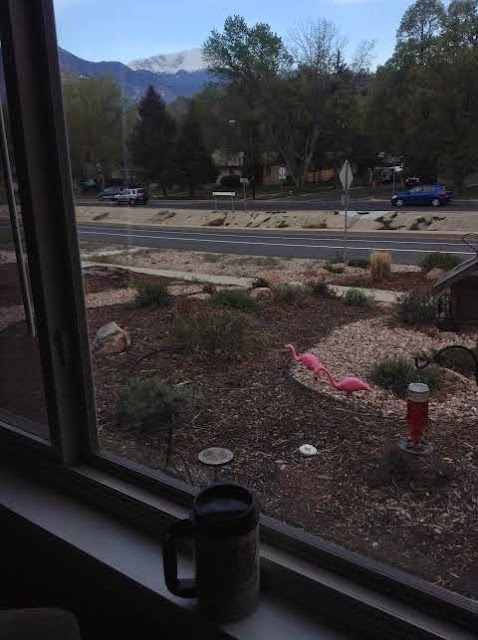 Some shots of the damage to the hike & bike trails that run between the Garden and 30th street.  My commute home uses these trails.  As does my ride to/from Red Leg. 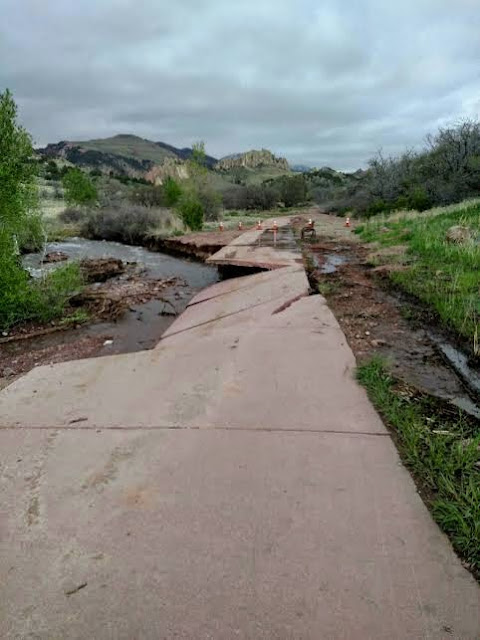 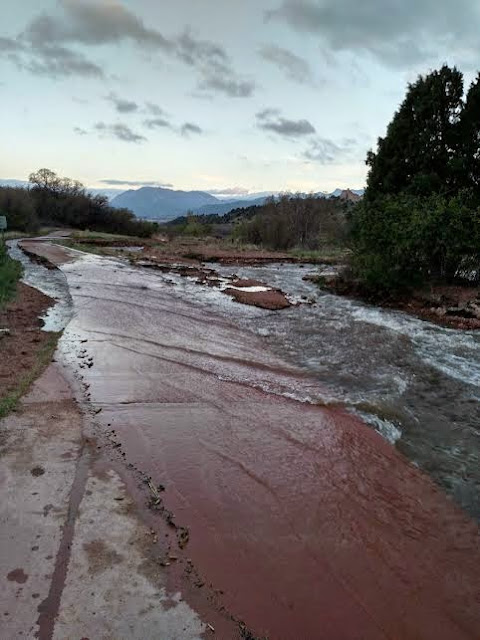 Today was bike commute #46 on the year.

Tried a new place for lunch to celebrate American Craft Beer Week.  The Cheese Grill opened a few weeks ago and I've been looking to try it.  I had a Mac & Cheese Grilled Cheese and it was quite tasty. 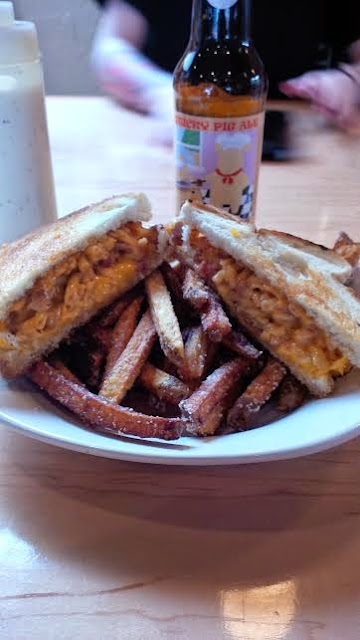 They also had a special maple bacon beer from The Occasional Brew to go along with the meal. 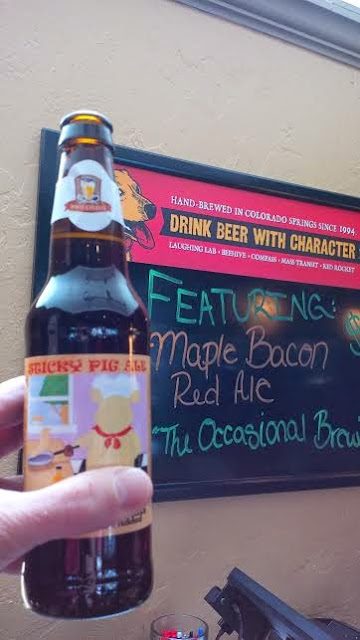 In other news, I never thought Geico would come close to topping the hump day camel commercial.  But this one is pretty good.

Finally had a weather window this morning.  I took the first part of it to take the dog for a nice hike, it's been a while since she's left the block.  After that I took off for what I thought would be a road 20 miler.  Nice tour of some of the local creeks, they're very high but not terribly close to overflowing the banks.  Through the Garden, through Manitou, out to Rainbow Falls.  So nice to see the sun.  On the way home as I turned back into the Garden for some bonus miles some freak rain/hail storm came out of nowhere and caught me completely off guard.  Within an instant, I was soaked, and pea sized hail was nailing me.  Each piece felt like a bee sting.  I had to run a good quarter mile to find a good enough tree to provide cover, so I was pretty beat up by that time.  Took cover for about eight minutes until the hail slowed, then bailed on the run and headed straight home.  14 miles on the day.

Here's a pic I stole, this was the hail storm I was caught in.  I love my cotton t-shirts, but they don't do shit to protect against this. 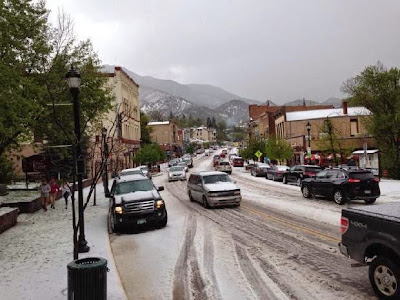 The wife just asked me when it's supposed to stop raining.  I said tomorrow.  "Really?"  Yes, but it's actually supposed to snow.
Posted by brownie at 5:31 PM 2 comments:

Back and finally sobered up from NOLA.  Incredible time, I'll get a post up on that soon.  It hasn't stopped raining since we returned late Monday night.  No major flooding so far, though Camp Creek started rising last night.  Might snow tonight.

The running/biking is in a funk due to the trip and the weather.  Did get a five miler in along the Mississippi River through the French Quarter last Friday.  Was looking to go further, but I randomly ran into my neighbor Carson, who was also out running, and at 9AM we just hit the first bar on Bourbon Street we could find.  Ran a drunk 18:26 in the Big Easy Big Heart 5K on Saturday.  Hit halfway with a shot at going sub 18, but couldn't hold that over the second half.

Staying off the trails due to the weather, just hanging out on the Garden roads.  Tuesday AM and PM was an easy five miler, both in drenching rains.  Wednesday was a morning 10K.  Thursday was a morning seven miler.  And five miles after work on Friday, where I finished looking like I had sat in the shower for 45 minutes.

Biking has been mostly restricted to work and back.  We did rent bikes in NOLA and took an awesome 20 mile pub crawl on some cruisers.  And I did manage to get up Cheyenne Canon on Wednesday, first time all year I made it up without having to push my bike at some point.  44 bike commutes on the year, three so far for May.
Posted by brownie at 9:17 AM No comments: