In another week I will have officially been playing guitar for one year.

I have always been a huge fan of the instrument, chasing the sound at live shows ever since high school.  I always thought it would be cool to play.  But that was always followed by "I wish I had started playing in high school."  Or college.  Or when I moved to Austin, the live music capital of the world.  Always sometime long ago.

As COVID hit and I slowly realized things were going to change for a bit, I thought it might be a good time to pick up a new habit rather than just increase my booze intake.

The goal had always been to play a Fender Strat.  I had a crappy $30 Suzuki left over from who knows where in the basement, and I made a deal with $100 - if I could play 30 minutes a day, five days a week, for a year, I'd get the green light to buy a cheap-ish electric guitar setup.

I kept that schedule, playing for half an hour in the morning after the dog walk.  Super basic stuff from the Fender Play app.  Struggling with cord changes.  Kinda sorta playing Louie Louie and Bad Moon Rising.  Quite often I'd get in another practice session at night before bed.  After a month of this I walked in to Moondog Music, located in the same building as Benny's, and signed up for weekly lessons.

Through some creative loopholes, the wife allowed me to upgrade the acoustic guitar long before the year mark.  I was the proud owner of a beautiful Seagull Entourage.  A fantastic guitar that I have loved playing these past few months, though at $550 it's way more expensive than I deserve at this point.

About a month ago it became clear that, for better or for worse, this wasn't a habit that was going to go away anytime soon.  So I started talking to a few guitar playing friends and searching around the interwebs.  I wanted to keep the total price for guitar and amp below $1500, which is a bit much for a rookie in his mid-40s but is still fairly affordable once you go down the guitar prices rabbit hole.

And boom, there she was.  Exactly what I wanted, but used.  Same with the amp.  A Fender Player Stratocaster and a Fender Champion 50XL amp.  $806 after taxes and shipping to the local guitar center. 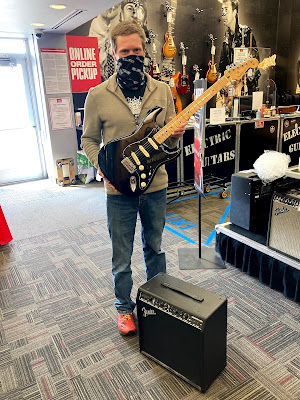 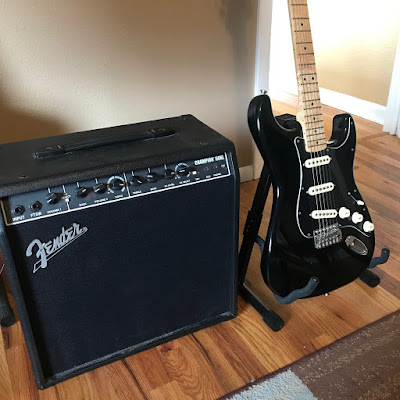 So I'm pretty excited to tear into this thing.  I can even kinda/sorta play a Hendrix tune - Hey Joe, though my solo would be a bit less than Jimi would offer up.

Completed the CMC land nav course on Saturday.  I used to be good at using a map and compass, I helped guide General Washington across the Delaware River back in my Army days, but I hadn't really done any of that stuff since then.  It's just too easy to pull out your phone nowadays.  But it was good to get out there for a little refresher.  Buff Creek had a ton of snow, and I assume they got a ton more since I was there.  Up next in the CMC alpine climbing school is snow travel, including a trip to St. Mary's Glacier in a few weeks.

We had planned on staying the night up there, but the place was just a mess of snow and mud, and with freezing temps on the way we were afraid we'd get the van stuck.  So we bolted back home and hit Fossil Brewing.

Decent run on Sunday around my COVID loop.  13.7 miles in 2:09, coming right after a 90 minute loaded dog hike.  Warm and sunny for the run but you could see the weather moving in.

Monday morning was devoted to snow removal.  Probably had seven to eight inches in the yard.  Did get up Red Mountain in the evening, followed by Manitou Brewing.

Tues - bike commute 22.  My biking is pretty much dead right now due to the sloppy conditions on the trails.  But hopefully soon I'll be taking Cheyenne Canon or Red Rock Canyon on the return home commute.

Haven't posted a pic of my dog in a while, so here you go: 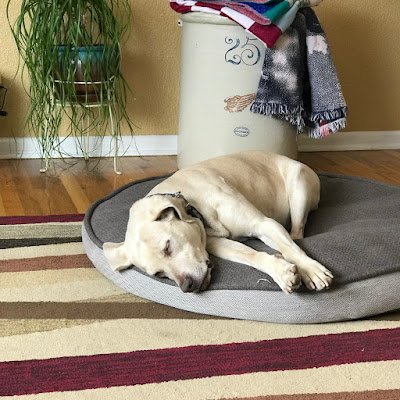 I did get in a good run on Saturday in lieu of the Salida marathon, but since then I haven't done much.  Ice and snow, shitty weather, some stuff for the CMC alpine climbing class I'm taking, and, of course, just being fairly lazy has made this a pretty low mileage week.

Good dog hike on Monday in Salida, and another good walk in Florence on the way home.

Tues - bike commute 19.  Through Sondermann there, straight back home.  CityRock 31 at lunch.  Renewed my annual pass at the climbing gym today.  I was still feeling a slight hangover when I went to bed.

Fri - bike commute 21 and a decent climb at lunch.

We are headed up to the Buffalo Creek area this weekend.  I'll finish up the land nav portion of my current CMC class while $100 and the dog hang out.  We'll have to get back early on Sunday as we are expecting another significant snowfall.

Posted by brownie at 5:56 PM No comments:

Bummed to miss the race but we still had a great weekend down in Salida.  I got a good 90 minute run in on Saturday morning, and lots of good dog hikes in, but the bulk of the weekend was spent either at Tres Litros or Benson's, with a little Moonlight and Wood's thrown in for good measure.  It's going to take my liver a few days to dry out.  The hazy IPA at 3L is dangerously good.

The weather in Salida was fine until Saturday evening, though lots of other parts of Colorado were getting some major snow.  More snow coming this evening, and possibly some heavier stuff early next week.  I'm ready for Spring.

Posted by brownie at 3:35 PM No comments:

On Tuesday afternoon I finally felt some aftershocks from shot #2.  Just some lethargy.  Being hungover all the time trained me well, but by the end of work I could only manage to bike the quick way back home, watch a movie, and head to bed for a good nine hours of sleep (I usually get seven).  Woke up feeling fine today (Wednesday) though.
Wed - run commute 17.  Five miles to work in 43 minutes.  They are making big progress on the new bridge to the olympic museum, I should be taking that route soon.
Another thing they are making progress on - the new Weldwerks tap house that will be opening by my house.  Perhaps by the end of summer???
The Salida marathon was postponed today, to next week.  I am out of town, so this will be the first year I miss the race.  Hopefully none of the whiney front range trail runners get their decked out Pathfinders dirty on the drive down.  It was too late in the game to cancel the VRBO so we are gonna head down this weekend anyways.
Posted by brownie at 2:13 PM No comments:

Thurs - run commute 16.  5.4 there in 51 flat, 5.6 home through Sondermann in 69 minutes.  Good climb at lunch.
Fri - bike commute 17.  10.7 miles there.  After work I met $100 at the new Red Swing Brewery in the old Fieldhouse Brewing building.  Later that evening I had the first zoom call of the Colorado Mountain Club Alpine Climbing School.  Looking forward towards getting that rolling.
Sat - Nielsen Challenge slog.  I can tell it had been A LONG time since I tried to race.  The goal was not aggressive, wanting to go sub 13, but I couldn't even get that.  13:05 officially.  Ugh.  Later that day $100 and I did a fantastic bike pub crawl.  Red Leg, Goat Patch, the new Mash Mechanix, the Triple Nickel, and Smiling Toad.  Good times.
The numbers for the week:
run - 34 miles/six hours
ride - 53 miles/5:15
hike - 21 miles/8.5 hours
Sun - bit hungover, but did get out for a nice 27 mile bike ride, heading south on the Santa Fe trail.  4.8 mile run on the Red Rock Canyon trails, ending at Fossil Brewing for my sixth brewery of the weekend.
Mon - easy ride on the COVID loop, 14 miles in 80 minutes.
Tues - bike commute 18.  10.75 miles to work.  Great day.  And the weather has been fantastic.  Hard to believe we have major snow coming along this weekend.
I received my second COVID vaccine shot on early Monday morning.
Posted by brownie at 12:16 PM No comments:

Bailed after work on Friday for Oil Well Flats.  Nice 4.5 mile family run on those trails on Saturday morning.  Didn't think twice about hitting The Owl for breakfast.  Yes, I ordered three double cheeseburgers at 9AM, van life is the best.
Then it was off to Monte Vista.  I had always heard about the sandhill crane migration and that gave us a good excuse to spend a weekend in the Valley.  It was pretty impressive, there were probably at least 10,000 birds just hanging out there.
Spent Saturday night at the town park in Del Norte.  They are nice enough to allow one night of vehicle camping in their park right by the river.  Luckily it's also a two minute walk to Three Barrel Brewing.
Back home on Sunday, dropping by Moonlight and Tres Litros.  Can't wait to spend a long weekend there for the marathon.  Florence Brewing ended a great weekend trip.
Monday - track.  I've probably been doing only MAF paced stuff for the last 15 months, thought it was maybe time to up the effort a bit.  Alas, the track was still covered in ice and snow.  Still ground out 6 x 400m with 200m RBI.  Untimed, but slow, luckily I can blame that on the conditions.  Red Mountain in the evening, hitting up Manitou Brewing for their seventh anniversary after that run.
Tues - bike commute 16.  Ten there, eleven back.  Spring weather FTW.  Good climb at lunch, once again tackling some 5.9s.
Wed - run commute 15.  Five there, four back.  Mediocre bouldering session at lunch.  Guitar practice in the evening, working on Neil Young's Harvest Moon.
Posted by brownie at 9:27 AM 1 comment: