Went to Brewer's Republic after work yesterday for a Telluride Brewing Company tap takeover.  Great beer, and it's now available here in the Springs.  Met both brewers, as well as the new brewer from Manitou Brewing.  The Manitou brewer assures me that while they will have stuff like sour beers, they won't forget that there are still some folks out there who enjoy drinking beer flavored beer. 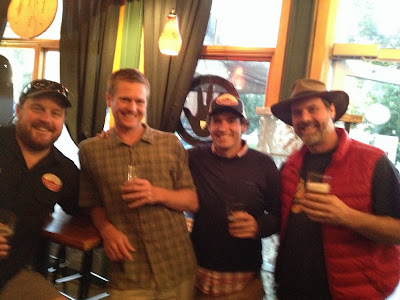 Picked up the new brewing map and hell if there weren't two places from Colorado Springs that I've never heard of.  Nano 108 Brewing way out on the east side near Kansas, and the Green Man Taproom & Beer Garden.  Neither of these places are open, but I have coupons for free beer when they do.  My extensive research on the topic led me to this list, which hints that in the not-to-distant future we could have more than 230 breweries in Colorado.  That's a lot of growlers.

Need to get back on some kind of normal workout schedule, I'm definitely starting to feel a difference as I slowly lose all that fitness I spent the first eight months of the year building up.  Will have to get on that tomorrow, as I'm headed to Reel Rock tonight.

Volunteering at the Bear Chase on Saturday.  I'll be out there all day if anyone wants to come say hello.

Good luck to everyone running this weekend.  The Bear, Bear Chase, Mt. Taylor, and of course the Zombie Run right here at Fox Run Regional Park.
Posted by brownie at 6:53 AM No comments:

I have not only been slacking on the running, but on the blogging as well.  Sorry to disappoint all my fans.  It's that time of year when running takes a backseat to other life happenings, but I'll be back at it soon enough.

Not getting completely lazy though, as I've been hitting the rock gym once again as well as hanging out on the bike.  Had my farthest ride ever on Saturday at the Bikes & Brews shindig down at Canon City.  We also launched a new running team that will soon overtake the Nike Oregon Project for dominance in the USA: 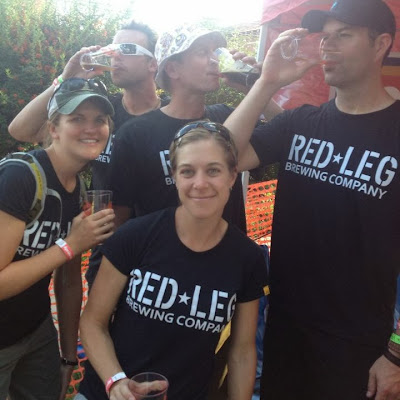 Bikes & Brews was a fantastic event.  Everyone should put it on the calendar for next year.  Somehow it will be even better in 2014 since we'll be able to bike over the Royal Gorge bridge by then.  We stopped four times for beer on the ride, including the Whitewater Bar & Grill, which may have slowed our time a bit.  Here's a shot that pretty well sums up the event: 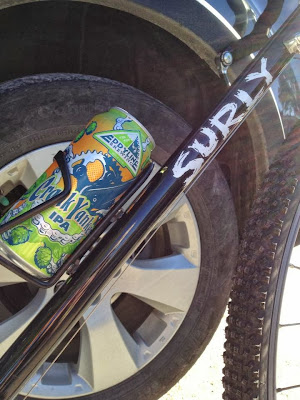 Lots of cool stuff coming up.  Headed out to Pagosa in two weeks to try the Epic Mountain Challenge.  I'm weak on the bike, and especially weak on the mountain bike, so it should be interesting.  Longest ride is a 50K, so if it gets too bad I'll just throw the bike over my shoulder and run the thing.  More importantly, I've heard good things about the new Riff Raff Brewing and I can't wait to try it.  Our hotel is within walking distance so Sunday's races should be fun.

I'm on the Red Leg men's team for the PPRR Fall Series, which is always a hoot.  Our only goal is to beat the Red Leg women's team.  I'll miss the first race but will be there for the final three.  If you're on the Front Range, this series is definitely worth the trip.

And I just signed up for my first gravel grinder.  They're having one that starts and ends at Pikes Peak Brewing.  So if you picked up the groupon from PPB yesterday, and can ride a bike, you have no excuse not to join me at the Greenland Gravel Grinder.

That's all nice and stuff, but I think what I'm most looking forward to in the next few months is the long awaited launch of the Manitou Brewing Company.  Read about it here.  Hired a guy away from Cascade Brewing in Portland, so there's some potential there.

Lots of yuppie beer news in this post, but rest assured I'm still getting my fair share of yellow beer.  Had lots of old friends from Texas visit over the weekend, and I bet I spent about 15 hours at the Red Rock Lounge. 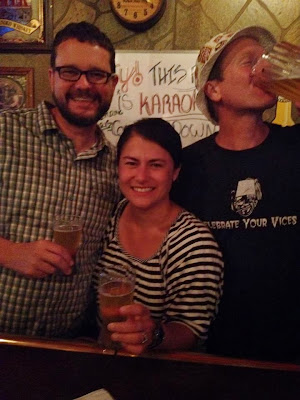 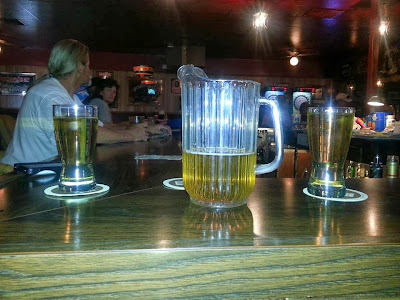 I'm usually the first to make fun of folks selling natural disaster related t-shirts, but I actually like this one: 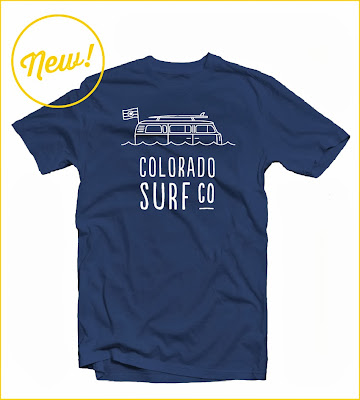 We did not get the disaster that the guys up north got.  It was close though- Fort Carson got 12 inches of rain in a 24 hour period, and if that storm had been over the Waldo scar things would have been a lot different.  Hear there's a lot of damage over in the Cheyenne Canon area, where I go a few times a week either to run or ride or hike the dog.  Gold Camp Road had a huge washout.  The connector trail that Tim writes about there is a part of the Fat Ass course.

Staying away from there, as well as the Garden and Red Rock Canyon, until things dry out a bit.

The 5K I had planned to run today was cancelled.  So far the Pony Express is a go.

In completely different news, looks like I'll be able to continue my Breaking Bad fix after this season.  Spinoff featuring Saul Goodman is in the works! 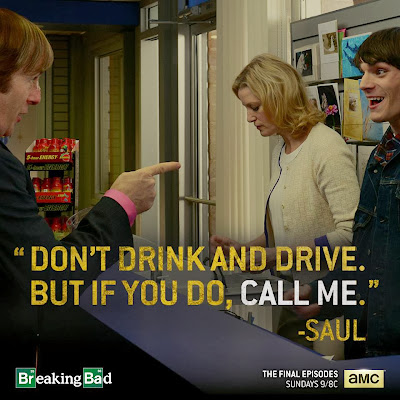 Posted by brownie at 7:51 AM No comments:

44th time up the train tracks on Wednesday evening.  Going to refocus on hitting 100 of these before 2014 gets here.  Lots of fog up there, couldn't see but 30 feet or so.

Hit the track on Tuesday evening for 8 x 400m.  Still averaging about 86 or so.  But that's three straight weeks of a track workout, hopefully the gains start coming soon.

Any good - flat, fast - road 5K's in the Denver area in the late November/early December time frame?
Posted by brownie at 6:56 AM No comments:

CRUD took on the milk challenge last Saturday, and it didn't go so well for most of us.  Video is over here.
Posted by brownie at 7:54 AM No comments:

Completed my first ever 50 mile bike ride on Sunday.  From the house up to Pikes Peak Brewing in Monument, also stopping by Red Leg Brewing on the way back (proper hydration is key to these long rides).  Averaged 13.5 miles per hour, not too shabby for a trail ride.
Posted by brownie at 7:04 AM No comments: 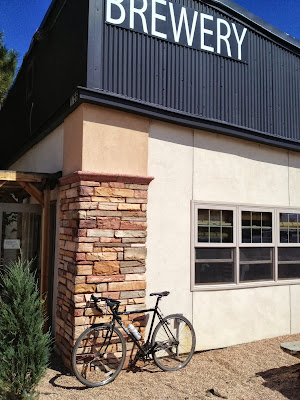 Mile 25. Already my longest bike ride ever, and I still have to get back home.
Posted by brownie at 2:08 PM No comments:

PG and his wife will be in town for the Bill Burr show tonight.  We're going to hit up Bristol Brewing before the show if anyone wants to join us for some brews.  Hope to be there by 6PM.

I heard the humane society will be there protesting since PG is a professional Pearl Izumi athlete. 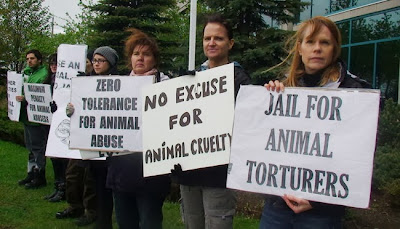 Follow up to the 80 year old busted for doping over here.  I don't view taking testosterone any better or worse than most of the supplements folks take nowadays.  "Oh, he took testosterone?  What a cheater!  Now excuse me while I go guzzle down 50 tablets of MAP with this special powdered drink I got off a shady internet site.  Then I have to go drop a few hundred bucks at GNC."  But I take a gummy bear one-a-day knockoff almost every day, so who am I to talk.

Good luck to JP out at Wisconsin and to all those running Wasatch!
Posted by brownie at 6:53 AM 3 comments:

Wed afternoon:  Nice hike at the dog park.  40 minutes, 1.6 miles.  With a local microbrew t-shirt on.  And of course I transported the rescue dog in a Subaru Outback.

Wed PM:  Incline #42.  It was raining, so I dropped by Kinfolk's after the workout to talk about flooding.

Think I'm going to jump into the Nielsen Challenge two miler this weekend.  Should give me a decent idea of where I stand for a 5K.  I'll feel good if I can run sub 12:20.

Rumor has it Fast Eddy is afraid of milk and will not be attending the CRUD party this Saturday.  I think he's worried that a nice ass-kicking will ruin his upcoming Hollywood debut.

Been following this debacle today.  Blech.  Ultrarunners are no better than triathletes or cyclists or tough mudders or crossfitters or anyone else we used to pretend we were better than.  In fact, after the past month, any athletes in the previously mentioned sports should be making fun of us for being such tools.

Reminds me of all the hoops I had to jump through and extra entry fees I had to pay and all the lawyers I had to hire when I ran the Rocky Mountain Slam.  Just kidding, all I had to do was run four cool as hell races and then this showed up in the mail one day: 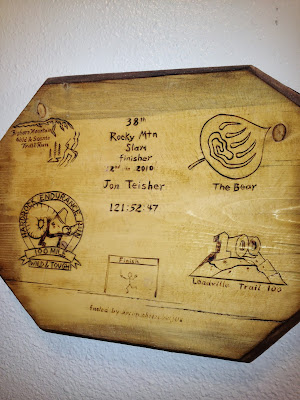 I would have paid a lot of money for that plaque but Leland donated the materials, time, and loot.  And he never once threatened to sue me.

And since I'm taking such a trip down memory lane, I'd like to remind everyone that 2010 was the year I destroyed Fuller in our only head-to-head match up at Leadville.

Got in some quality cross training as I had to bowl at a work function.  Bowled (threw?  rolled?) a 94.  I'd love to make fun of bowling here but in light of what happened in the ultra world, I really can't.

And in case anyone missed the big game last night, it's going to be a while before Pitt can compete for an ACC title. 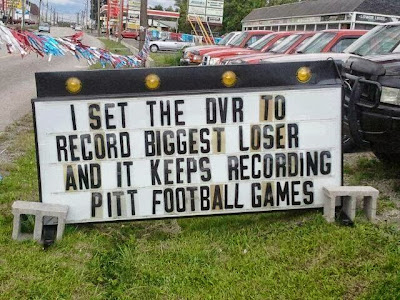 Saturday it was up to the Fort to run Sir Nick's "half-marathon."  Nick has offered to help out with the mess at Leadville, but he needs to get his shit in order first as this run clocked in at a whopping 13.3 miles.  I'm pretty sure I was the only one in the field not to negative split this.  Ran a good first half then took it real easy on the downhill.  Then we got into some canyon where the temp hit 400F so I walked most of it.  Great race though, volunteers were awesome as they always are up there and there was a good scene at the finish.  LOVE races that give out pint glasses to finishers and then have a keg already tapped.

Some lawyer contacted me after the race and threatened me because I wished Nick good luck in the Grand Slam.  Anyone know what's up with this?

We hit up the Tour de Fat after the race.  Incredible time.  This is the only decent pic I could find, which pretty much sums up the experience: 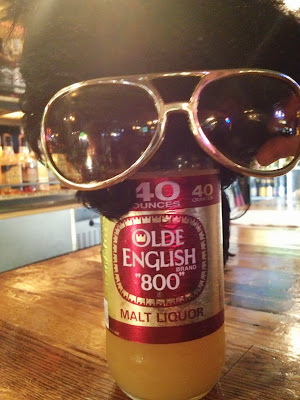 There were three flyers for zombie runs in the latest Pikes Peak Road Runners newsletter.  This is hardcore legit shit unlike those pussy bubble runs everyone is talking about. 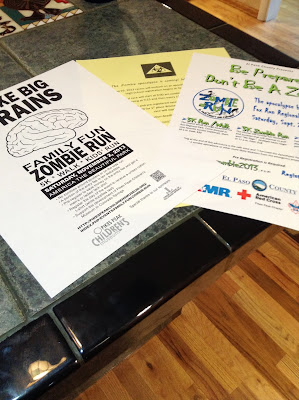 Easy hike up Mt. Lincoln this afternoon with some friends and some dogs.  Went with the Surly Bender on the summit since I've had multiple PBR's on this one. 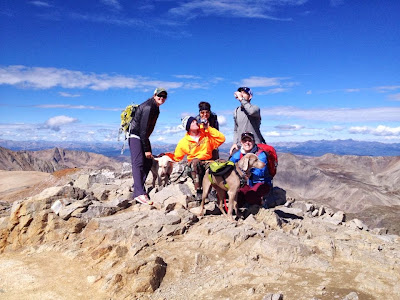 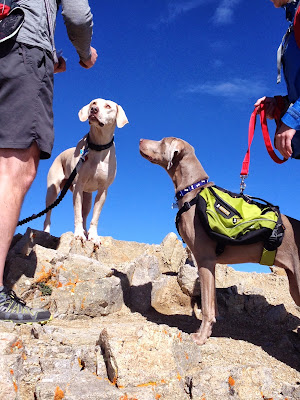 An 80 year old Colorado Springs weightlifter was recently busted for doping (thanks to Wiley for the tip).  Ramos seemed like a good guy, too.  If you go here and scroll down to the article "Masters Weightlifting Champion Trains The Trainers" you can read about his work with the military.

Going to see this guy on Friday.