The bike tourers we hosted recently, Megan and Hector, have posted about their Colorado Springs stay.

Rare mid-week day off yesterday, so I took advantage of the good weather and rode up to Greenland Open Space and back.  65 miles, ride number eight on the Cup 'O Dirt Challenge.  I'm going to need the weather to hold out if I'm going to get twelve rides in this year.  Which doesn't look promising, considering Pikes got a good bit of snow this morning. 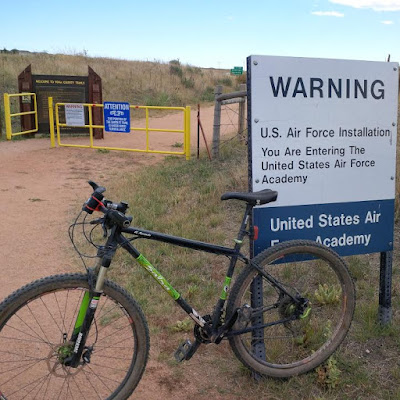 It looks like GZ and I are going to throw down at a 5K in Westminster on October 30.  Given how quickly our blogs have gone from running blogs to injury blogs, we both might have died of old age by that time.  Since he is already making lame excuses in case of a poor performance, here's mine: this is the morning after the Widespread Panic concert.

Saw Semi-Rad last night.  Dude is a great speaker.  And you should all go read his newest book (and his older books).  I had him sign my Ace & The Desert Dog hat and bought a copy of his book for one of those free libraries that opened down the street from me.  He is considering a 100 miler, which I tried to talk him out of...

I am just resting up to be daisy fresh.

Loved the video, thanks for posting!